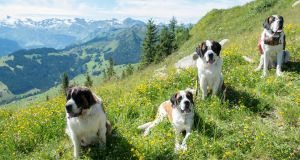 Sperm quality in dogs has fallen rapidly over the past three decades, researchers have found, in a study which could explain the purported decline in human fertility. File photograph: Urs Flueeler/EPA

Sperm quality in dogs has fallen rapidly over the past three decades, researchers have found, in a study which could explain the purported decline in human fertility.

The findings have highlighted a potential link between environmental contaminants and fertility - after scientists discovered chemicals which had a detrimental effect on sperm function in some commercial pet foods.

Researchers at the University of Nottingham believe that the study could help explain the apparent significant decline in human semen quality.

Dr Richard Lea, reader in reproductive biology at the university’s school of veterinary medicine and science, who led the research, said: “This is the first time that such a decline in male fertility has been reported in the dog and we believe this is due to environmental contaminants, some of which we have detected in dog food and in the sperm and testes of the animals themselves.

“While further research is needed to conclusively demonstrate a link, the dog may indeed be a sentinel for humans - it shares the same environment, exhibits the same range of diseases, many with the same frequency, and responds in a similar way to therapies.”

Dr Lea and his team collected semen from between 42 and 97 stud dogs every year for 26 years at an assistance dogs breeding centre.

Semen samples were then analysed to assess the percentage of sperm that appeared normal and had the expected pattern of motility.

The research, published in the journal Scientific Reports, also found that male pups fathered by the stud dogs with declining semen quality were more prone to cryptorchidism - a condition in which the testes fail to correctly descend into the scrotum.

Dr Lea said that genetic conditions were not to blame because the research was carried out over a relatively short period of time.

He said that the study “begs the question” whether a similar effect could be observed in human male fertility.

The purported decline in male fertility is a controversial subject in science, with many criticising the variability of the data in the studies.

However, Dr Lea said that the University of Nottingham study provided a “unique set of reliable data from a controlled population” which was not affected by factors - such as in laboratory methods, training of laboratory personnel or improved quality control over the years - which could have caused variations to the results.

British Fertility Society spokesman Prof Allan Pacey said the findings mimic “what others have claimed may have happened in the human male over the last century.

“Although there is conflicting evidence to suggest that sperm quality in humans has declined significantly, this study is particularly interesting as the results suggest an increase in problems of the dog’s testicles and a decline in the number of female dogs born over the study period.

“In addition, concentrations of some environmental chemicals in the dog’s testicles as well as in commercial dog foods were also detected.

“Indeed, because dogs share the human home, this could suggest that they might be a useful model species to detect possible threats to male reproductive health.

“From these results alone, we cannot determine any impact these results may have on human public health. This data must therefore be interpreted with caution and used to guide further studies.”