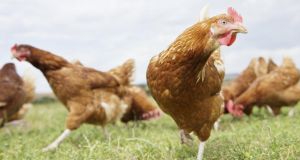 There is mounting evidence that chickens are much smarter than anyone thought and that they understand their world. This research is described by Carolynn Smith and Sarah Zielinski in the February 2014 issue of Scientific American and the findings should greatly trouble us when we consider how chickens are treated on factory farms.

Some animals are very smart, for example New Caledonian crows make and use tools, but nobody thought that chickens are clever. However, we now know that chickens have communication skills as good as some primates, convey their intentions using sophisticated signals, take prior experience and knowledge into account when making decisions, and empathise with other chickens perceived to be in danger.

Early research showed that chickens can vocalise about 24 different sounds, many specific to certain events. The clucking sound is used when they encounter a ground predator. When chickens see a predator above, they emit a high-pitched “eeee”. When a male chicken finds food, he makes a series of “dock-dock” sounds, especially when a female is listening.

Research in the 1990s confirmed that chickens communicate with each other through these various sounds combined with movements. For example, when a chicken hears the “eeee” warning call, a mental picture of a hovering predator is elicited, prompting the appropriate response – flight to safety.

Research has also shown that, in Smith’s and Zielinski’s words, chickens “can be devious bastards”. The main stratagem used by the alpha male chicken to attract mates is “tidbitting” – a combination of twitching the head from side to side, bobbing it up and down and repeatedly picking up and dropping food, all the while making “dock-dock” sounds to signal the females that he has found a tasty morsel. Researchers predicted that subordinate males would not indulge in tidbitting so as to avoid being punished by alpha males. However, observations showed the subordinates carry out the visual actions of tidbitting, but leave out the “dock-dock” sounds, hoping to attract females while keeping it quiet from the alpha male.

Warning calls
Researchers were puzzled as to why a chicken would sound an alarm on seeing a hawk overhead because this places the caller at greater risk of being spotted and attacked. It was assumed that the protection of mates and offspring was important enough to make the personal risk worthwhile. However, other factors also influence calling behaviour. Males sometimes sound warning calls for selfish reasons, being more likely to call when they can increase a rival’s risk while minimising their own. A male will more likely call when he is safely hidden and his rival is exposed in the open, giving him a reasonable chance of both safeguarding his girlfriend and eliminating a rival.

Chickens also show empathy, an ability seen in only a handful of species. Mother hens were monitored as they watched their chicks receive harmless puffs of air under their feathers. The chicks thought they were in danger and became stressed. The mothers also became stressed observing the chicks’ reactions.

Chickens inherit their cognitive abilities from their wild ancestor, the red jungle fowl of Asian forests, which lived in semi-stable groups of four to 13 individuals. Intense competition for females, together with handling a wide range of outside dangers, forced the evolution of a range of clever communication strategies.

We now raise chickens on factory farms – 70 million are produced annually in Ireland. A chicken that would naturally live in a small wild group is now hemmed in with as many as 50,000 other chickens. The modern chicken has been genetically selected for fast growth. Its potential lifespan is 10 years, but it is killed after six weeks because, if allowed to live longer, it would develop heart disease, osteoporosis and broken bones. Chickens bred to lay eggs live longer – about 18 months – in a space the size of an A4 sheet of paper. The chickens survive under these awful conditions because evolution has equipped them to be adaptable.

It is surely wrong to subject chickens to such conditions, considering their remarkable nature. However, things are improving. Simon Coveney, Minister for Agriculture, introduced animal welfare legislation on March 7th and new laws are being passed in Europe and the US that call for improved housing for egg-laying chickens. Let us hope this is just the start of a raft of improvements.


William Reville is an emeritus professor of biochemistry at UCC. understandingscience.ucc.ie