Ian O'Sullivan and Eimear Murphy from Colaiste Treasa, Cork win the overall prize at the BT Young Scientist and Technology Exhibition 2015 with their project Alcohol Comsumption: Does the apple fall far from the tree? 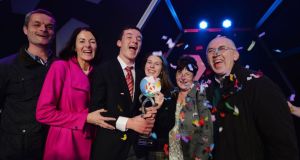 Ian O’Sullivan and Eimear Murphy from Coláiste Treasa, Cork, overall winners of the 51st BT Young Scientist and Technology Exhibition for their project Alcohol Consumption: Does the Apple Fall Far from the Tree? Here they are celebrating their win with their parents Eileen and Donal O’Sullivan and Kathleen and John Murphy. Photograph: Alan Betson/The Irish Times 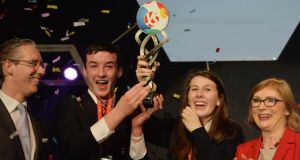 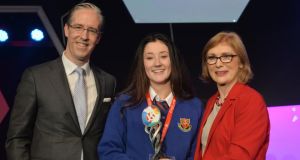 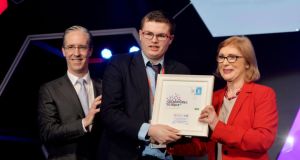 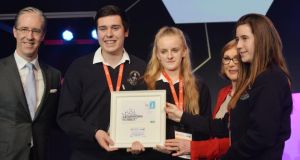 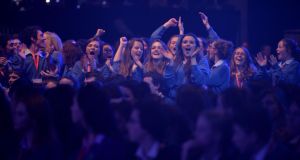 A group project by Cork students looking at teenage alcohol consumption has claimed top prize at the BT Young Scientist and Technology Exhibition at the RDS.

The best individual prize went to a Co Louth student for her development of a wrist support for boxers.

The top four awards in the exhibition were announced Friday evening, with Ian O’Sullivan and Eimear Murphy being declared the 2015 Young Scientists.

Their project looked at whether parental alcohol consumption has an impact on the drinking habits of their teenage children, explained the 16-year-old transition year students at Coláiste Treasa in Cork.

“We wanted to see if there was a parental effect on their kids’ consumption of alcohol,” says Eimear.

The two put together a survey and distributed it to fifth and sixth year students from schools around the Mallow area, she explains. “We wanted to assess hazardous drinking habits.”

This involves consuming too much alcohol or drinking too frequently, habits that have an impact on health, Ian says.

The two found parental drinking habits, particularly that of the father, had a major impact on their children’s drinking.

They also discovered that parents who believe it is acceptable for their children to drink alcohol on special occasions were up to four times more likely to engage in hazardous drinking than other adolescents.

They receive the BT young Scientist perpetual trophy, a cheque for €5,000 and a chance to represent Ireland at the European Union Contest for Young Scientists taking place later this year in Milan.

Wrist injuries are a common problem in boxing, and as a former boxer, Rachel decided to do something about it.

She discarded the current approach of binding up the wrist with a cloth bandage, a method introduced in the 1920s.

Instead she designed a glove-like wrist support that could reduce wrist deflection, and so cut injuries. “It is comfortable to wear and supports the wrist without restricting normal movement,” she says.

She asked Irish boxer Katie Taylor to try out the wrist support and the champion found it very good, says Rachel.

She also collected a considerable amount of data to show that her device really made a difference.

“It gives you a competitive advantage,” she says. It slightly increases punching force and reduces down time as a result of injuries, she adds.

Rachel has applied for a patent for her design and has plans to bring it to the International Boxing Association.

She receives a perpetual trophy and a cheque for €2,400.

Their novel study looked at whether birdsong may have been the inspiration that caused similarities between African and Irish traditional music.

Migrating swallows and other species spend time in Ireland and Africa, and musicians looking for inspiration could have picked up melodies from the birds, according to the theory proposed by the three students from Carrick-On-Shannon Community School, Leitrim.

All three are traditional musicians and so would have an ear for a tune.

Patrick came up with the idea and presented it at last year’s BT Young Scientist and Technology Exhibition. He came back again this year with his two collaborators.

They began studying birdsong, comparing it with melodies in Irish and African music. They made this easier for themselves by investigating the frequency waves of the music, which allowed them to look at any similarities in great detail.

They also believe they can open up a source of new inspiration by using recordings of birdsong from the isolated Galapagos Islands.

They receive a perpetual trophy and a cheque for €1,200.

He developed a way to turn an ordinary smartphone into a fully functional desktop computer.

“The power of smartphones is increasing all the time and is now approaching that found in PCs,” he said.

It would be for the phone manufacturers to decide whether they wanted to include a second connection point that would make it easier to use the smartphone in this way.

“The ultimate goal would be a phone with built-in applications like this,” he said. It would convert the phone into a single device for all of a person’s information technology requirements, he said.

He receives a perpetual trophy and a cheque for €1,200.