Broccoli may trump genetics when it comes to arthritis 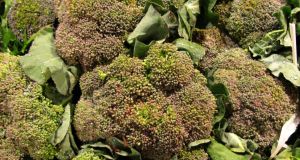 Sulforaphane is released when eating cruciferous vegetables such as Brussels sprouts and cabbage, but particularly broccoli. While earlier studies involving the superfood focused on cancer, there is now a first major study into its effects on joint health


What your post code is and whether you fancy a few florets of broccoli for dinner may trump your genetics when it comes to your chances of getting arthritis.

Lifestyle traits, including smoking and other environmental factors, could help trigger the onset of arthritis by affecting the biological mechanisms associated with the disease, according to Arthritis Ireland/UCD chair of rheumatology, Prof Gerry Wilson.

His comments come as British research published today in the journal Arthritis & Rheumatism finds a substance found in broccoli could prevent the progress of osteoarthritis, the most common form of arthritis.

More than one-in-five Irish people or about 915,000 have some form of arthritis according to 2011 census data, with some 34 per cent of women and 23 per cent of men affected.

Sulforaphane is released when eating cruciferous vegetables such as Brussels sprouts and cabbage, but particularly broccoli. While earlier studies involving the superfood focused on cancer, this is the first major study into its effects on joint health.


Inflammation
The University of East Anglia study, which also examined human cartilage cells, discovered that sulforaphane blocks the enzymes that cause joint destruction by stopping a key molecule known to cause inflammation.

Lead author Prof Ian Clark said: “We now want to show this works in humans. It would be very powerful if we could.”

Small-scale trials are now planned for osteoarthritis patients due to have knee replacement surgery, to see if eating broccoli has similar effects on the human joint.

“This is a significant study,” says Prof Wilson, adding: “We’ve been really successful at modulating rheumatoid arthritis but there are no disease-modifying drugs available for osteoarthritis patients.”

John Church, chief executive of Arthritis Ireland, said the advancement of research was a key objective for the charity, as the “ultimate goal for all people living with arthritis is to find a cure”.

The organisation contributed more than €2.5 million earlier this year to create the Arthritis Ireland chair of rheumatology in UCD to which Prof Wilson was recently appointed and a second chair is to be filled at TCD.

“We want to be able to identify risks. International data show factors like how you live or what your post code is can influence the disease epigenetics,” Prof Wilson said.

“Arthritis research is strong in Ireland,” he added. “Dublin is way ahead of big British cities in patient-based studies.”