An Irish exploration of the secret plant life of Honduras 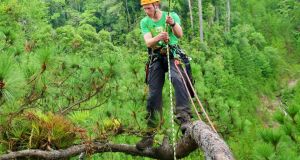 Expedition Honduras: a member of the Irish team at Cusuco National Park 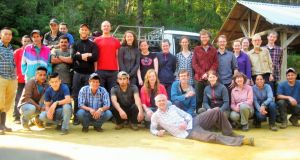 Expedition Honduras: a member of the Irish team at Cusuco National Park

Tropical regions have been subject to western scientific observation since European naturalists began journeying there at the beginning of the 19th century. Mungo Park’s travels deep into Africa, passing Timbuktu, are the stuff of legend.

In south and central America, the journeys of Prussian naturalist Alexander von Humboldt resulted in remarkable discoveries, and inspired generations of scientific thinkers.

These environments were rich in plant diversity, meaning an abundance of species could be collected. But the warm and humid tropical environments were also harsh and troublesome. The same opportunities and challenges remain today, and modern expeditions are well-prepared.

The expedition aimed to gather one of the most comprehensive bio-ecological forest inventories of Central America ever recorded, and was composed of 16 scientists, including taxonomists, ecologists, evolutionary biologists and climate researchers.

“Our primary aim was to record the forest vegetation and how it varies in relation to the environment, for example the altitude, or degree of disturbance from hurricanes,” says Prof Kelly.

In order to record these details, plant scientists need to be well-trained in fieldwork techniques. So the group organised a number of training sessions in advance of the expedition, focusing on identifying different groups of tropical plants.

“The hothouses at the National Botanic Gardens were a good starting point,” says Kelly. “But it’s impossible to be really prepared for the sheer diversity of plants that confronted us in Honduras at every turn in the trail.”

Cusuco National Park is a mountainous region of tropical forest. At the study site above 1,400m (Ireland’s Carrantuohill peaks at just 1,038m), the team’s campsite was remote, warm and wet.

“Base Camp is reached by a steep and deeply rutted road. You need a four-wheel-drive vehicle and a good driver,” says Prof Kelly.

The camp consisted of two wooden buildings with a work room, a kitchen, showers and a couple of offices. But at the group’s other outposts, team members slept in tents and hammocks slung between trees, washing themselves in rivers and under cold waterfalls.

The team spent their days hiking and collecting leaf and flower samples, using extension pruners when necessary to reach high-hanging specimens. The diversity of plant life in the park is matched in the animal kingdom. Prof Kelly speaks of the mind-blowing range of insect life, and the group’s absolute requirement for insect repellent.

“But the great limiting factor when doing fieldwork in the tropics is how early and swiftly the night falls,” he says. “Our camp manager imposed a 5.30pm curfew, so we had to rise early to make the most of the day.”

Another threat is the weather. “We were unlucky to get battered by a rainstorm that lasted three days,” says the expedition’s other leader, Dr Sven Batke.

“A lot of us lost our dry clothes during the downpour and we had to dry our sleeping bags, clothes and equipment at the fire.”

Assessing the diversity of life in a forested region is impossible if you can’t reach the forest canopy. This expedition included a team of trained climbing experts who were vital for identifying species at those heights. Eight people comprised the tree-climbing team, which was led by Dr Batke.

“Canopy climbing incorporates a highly specialised skill set,” says Batke. “We use the rope-climbing techniques used in arboriculture: the study dedicated to the management of individual trees. “Ropes and harnesses are used to pull us up to the canopy, reaching heights of more than 60m.”

The species living at or near the forest canopy account for the majority of diversity in tropical regions, and any survey is incomplete without them, Batke says.

This diversity is represented in the collection of plant specimens now back in storage at Trinity College Dublin.

THE GLOBAL GOOD: WHAT PLANTS DO FOR THE PLANET

Plants are a major player in the world’s environmental and climate systems. They provide the oxygen we breathe, the majority of food we eat, and draw down a huge amount of carbon dioxide from the atmosphere, meaning we would not be here without them.

On a global scale, plants play a particularly important role in our climate. Plant leaves act as a gateway through which carbon dioxide and water are transferred between the atmosphere and the land.

By opening valve-like holes in their leaves, called stomata, plants absorb carbon dioxide for use in the photosynthesis process, allowing them to grow and reproduce.

As a trade-off, opening the stomata also results in a loss of water to the atmosphere, through the process of transpiration. So, on a global scale, which includes all the major forests on Earth, these biological processes regulate the amount of carbon dioxide in the atmosphere, and water in the ground.

This means that changes in plant behaviour could potentially alter the Earth’s water and carbon cycles.

For example, as carbon dioxide levels in the atmosphere continue to rise in the future, it is anticipated that plants will reduce the number of stomata on their leaves, regulating the photosynthesis process but, crucially, reducing the water lost to the air.

The retained water can then remain in the land system, across continents, and is suggested to increase groundwater levels and flood risk in the future.

Such biologically induced flood risk is an important social issue that requires investigation, and is an ongoing topic of research across the world.