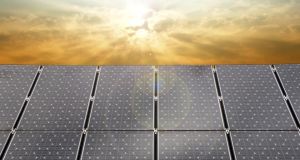 You’ve heard of talking to your plants, but how about playing music to your solar cells? Researchers have found that playing acoustic vibrations – including popular tunes – near a particular type of solar cell could improve photovoltaic efficiency by up to 45 per cent.

The experiments, described in the journal Advanced Materials, involved solar cells containing nanorods made from zinc oxide (a piezoelectric material) covered with an active polymer. The scientists, from Queen Mary University of London and Imperial College London, showed that even quite low sound levels – the equivalent of roadside noise or an office printer – could improve cell performance.

When they tried different types of music, they found that pop and rock trumped classical music for power-boosting effects.

“We tried playing music instead of dull flat sounds, as this helped us explore the effect of different pitches,” said researcher Prof James Durrant from Imperial College London in a release. “The biggest difference we found was when we played pop music rather than classical, which we now realise is because our acoustic solar cells respond best to the higher-pitched sounds present in pop music.”

He added that “some frequencies of sound seemed to amplify the solar cell output – so that the increase in power was a remarkably big effect considering how little sound energy we put in”.