A likely explanation for alien abductions

Many people sincerely believe they have had such experiences, but there might be a simple reason 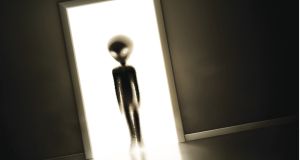 ‘Experts agree that most people who claim alien abduction experiences are sane and sincerely believe they have encountered aliens.’ Photograph: Thinkstock

The October issue of The Psychologist is mainly devoted to psychological considerations of human interactions with outer space. The article I found most interesting, about close encounters with aliens, was written by Christopher French. Nick Kanas also speculates about how astronauts will cope with deep space travel. One fascinating scenario for interstellar expeditions described by Kanas involves a giant multigenerational starship on a 200-year expedition to Alpha Centauri (the closest star system to our solar system). The crew is socially engineered to ensure a stable population adequate to the limited space, food and water resources on board. The initial crew (150-180 people) are young, childless married couples who will not have children until they enter their 30s. The number of children would be limited to the population needs of the mission. The breeding cycle repeats for subsequent generations such that the population stratifies into echelons of well-defined demographics of roughly equal numbers over time, clustered into age groups about 30 years apart. The older members teach the youngest members, and the middle echelon performs routine maintenance work.

A close encounter of the first kind is a simple sighting of an unidentified flying object (UFO) with no other supporting evidence. More than 95 per cent of UFO sightings are later explained as misidentified weather balloons, aircraft and so on. There is no reason to believe that the tiny percentage of sightings that cannot be identified are anything strange. A handful of sightings will naturally lack sufficient evidence for identification, just as the police cannot find enough evidence to solve every crime.

A close encounter of the second kind is a sighting apparently supported by physical evidence, typically photographs. However, these photographs are often ambiguous pictures of ordinary objects. It is now easy to fake a photograph using Photoshop, for example, and there have been many hoaxes. No convincing evidence has ever been produced to support a genuine close encounter of the second kind.

A close encounter of the third kind involves direct contact between humans and aliens who often have messages for humans, for example about the dangers of nuclear war.

Stories of close encounters of the fourth kind, where a human is abducted by aliens, now outnumber stories of encounters of the third kind. In an early 1957 report a Brazilian farmer described being pulled into an alien spaceship and forced to have sex with a female alien, who made barking sounds during intercourse.

The experience reported by Betty and Barney Hill in 1961 shares common features with many reports of encounters of the fourth kind. The Hills were driving home when they sighted a UFO. They arrived home later than expected and were to unable to account for a period of two hours. Betty started to have dreams in which aliens pulled her into their spacecraft and medically examined her. Years later, both Hills were hypnotically regressed by a psychiatrist and recovered detailed memories of the 1961 alien abduction and medical examination.

Experts agree that most people who claim alien abduction experiences are sane and sincerely believe they have encountered aliens. French proposes that a common phenomenon, sleep paralysis, could make many think they had contact with aliens. Sleep paralysis occurs just before one falls asleep or wakes up, normally lasts a few seconds and may feel a little odd, but no more. But in a minority of cases it can be a terrifying experience, accompanied by a strong sense of evil, difficulty breathing, seeing lights and grotesque figures, hearing voices and feeling one is being dragged out of bed.

The next step for many is to consult a hypnotherapist in order to recover “lost memories” of the encounter. French argues, quoting considerable evidence, that hypnotic regression is very likely to produce false memories. The whole alien encounter phenomenon seems to have nothing to do with outer space and everything to do with inner headspace.

Number in hospital with Covid-19 falls again to 537 17:15
Woman accused of publishing photos of teenage killers takes court challenge 17:02
Woman jailed for assaulting a family friend who was trying to break up a fight 16:43
Burglar jailed for sexually assaulting woman who awoke with his hand on her throat 16:32
Convicted fraudster surrendered to UK authorities 16:27