100ft-wide asteroid due for close-encounter with Earth 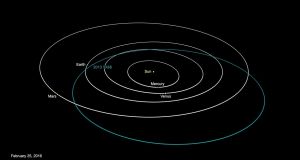 A 100ft-wide asteroid is heading for a close encounter with Earth on Sunday and could come closer than some orbiting satellites.

But scientists are sure it will miss the Earth by at least 24,000km, and say there is no need to panic.

The space rock, named 2013 TX68, was spotted three years ago by astronomers in the US scouring the skies for potentially threatening near-Earth objects (NEOs).

Because it was tracked for only 10 days, its orbital path is uncertain. Experts believe it will make its closest approach to Earth on Sunday, although the forecast might be one or two days out.

Calculations show that 2013 TX68 could shoot past the Earth well within the ring of geostationary communications and GPS satellites stationed about 35,900km above the equator.

At the other limit of its predicted range it could remain as far out as 40 times the distance to the moon.

US astronomer Sean Marshall, from Cornell University in New York, who studies NEOs such as comets and asteroids, said: “Should this asteroid come closer than the geostationary satellites, it would be a rare occurrence — that only happens about once per decade for large asteroids.

“What we know for sure is that it will not collide with Earth this month, so do not panic.”

He added: “It is extremely unlikely that any satellite will get hit. TX68’s trajectory will take it on an arc through a huge region of space, and satellites are very small objects.

“An asteroid hitting a satellite would be like a blindfolded person throwing a pebble and hitting a single small needle in an enormous haystack.”

He said the asteroid had “absolutely no chance” of colliding with the International Space Station, which circles the Earth at an altitude of only about 400km.

“The closest that TX68 can possibly get to Earth is 24,000 kilometres,” said Mr Marshall.