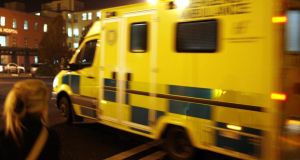 A spokesman for HSE South said yesterday an ambulance was called to the Tir Cluain Housing Estate at 6.41pm on Saturday and was onsite by 6.59pm to tend to James Casey Butler. Photograph: Dara Mac Dónaill/The Irish Times

Health Minister Dr James Reilly has asked for a report on the circumstances around the death of a seven-year-old boy a day after falling into a flooded river.

An advanced paramedic, a locally based first responder, was at the Owenacurra river in Midleton, Co Cork seven minutes after an emergency call was made that James Butler Casey had been swept away.

The Health Service Executive (HSE) said an ambulance, which had to travel from Cork city, was on site in 19 minutes.

The authority rejected any suggestion of a deficit in ambulance numbers in the region after reorganisation last year.

Dr Reilly said a report on the emergency will be compiled by Cork University Hospital (CUH). “While I await a full report, the first thing I want to do is empathise with the family on their terrible tragic loss. The last thing any parent wants to do is to be at their child’s funeral,” he said.

HSE South had refuted newspaper reports which claimed an ambulance sent to the scene of the incident and subsequently died was subject to lengthy delays.

James, from Forrest Hill in Midleton, Co Cork, died on Sunday evening at Our Lady’s Children’s Hospital in Crumlin just over 24 hours after he fell in to the Owenacurra River in east Cork.

James had been transferred from CUH to the Dublin hospital for specialist treatment. However, he lost his battle for life shortly after 8.30pm on Sunday.

A spokesman for HSE South said yesterday an ambulance was called to the Tir Cluain Housing Estate at 6.41pm on Saturday and was onsite by 6.59pm.

“An interim off-duty paramedic was also at the scene. It is a very tragic incident. Unfortunately when an ambulance is called it can feel like a lifetime. We understand that. The correct procedure was followed.”

Midleton, which has a population in excess of 20,000, is currently without an ambulance. Its first responder medical alert car was on a callout in Cork city when the incident occurred on Saturday evening.

Speaking in Dublin, Dr Reilly has said it is not feasible to have permanent ambulances in every single town in the country.

"We don't have the resources to do that. What we want is a system where there is access to immediate care as soon as possible, and I think the terrible tragedy in Midleton shows that is the case [...]

“In relation to the inaccurate report of [of the ambulance taking 45mins], I'm aware that there was an advanced paramedic on the scene within seven or eight minutes and that an ambulance was present in 19 minutes. But I would expect to get a full report on this given the terrible tragic outcome."

Mr Reilly also addressed the situation whereby James had to be taken by ambulance from CUH to Cork Airport in order to facilitate a transfer to Our Lady's Hospital in Crumlin arising out of the absence of a helipad onsite.

"The issue of the helipad - currently the situation is that they land at Cork Airport and they use the airport at night because it’s safer.

“There is a field nearby that they can land in - but obviously as we move towards hospital networks, its my opinion absolutely that we should have a helipad in each hospital that is the centre of the network."

CUH has not had an operational helipad in over a decade. Patients and local public representatives have repeatedly raised safety concerns over the issue since a previous helipad was removed from the hospital eleven years ago to facilitate building work.

Currently, patients flown in to CUH for treatment must land at Cork Airport or local rugby club fields before being transferred by ambulance to the hospital.

The provision of a helipad facility at CUH has been included in the Development Control Plan for the hospital campus. The project was costed at over €1 million but was postponed due to issues surrounding funding.

Earlier, local Sinn Féin Councillor Pat Buckley insisted the HSE is failing to address the issue of the absence of a Midleton-based ambulance service.

He said an ambulance had to travel from Fermoy to Midleton in order to assist the critically injured child after tragedy struck while he was out playing with friends.

“Midleton is a huge demographic area not to have an ambulance. It is a disgrace that we are talking about an ambulance at a time of such tragedy.

“We were promised two ambulances in Midleton last year and we still don’t have one. If we had an ambulance it would only have been two minutes from the scene.”

Cllr Buckley said he had heard reports of patients in Midleton having to wait for up to three hours for an ambulance to be dispatched.

Meanwhile, locals in the Tir Cluain estate have expressed concern about the gap in fencing which allowed James direct access to the riverbank. The local authority has been called upon to erect more appropriate fencing at the riverbank.

Resident John Shanahan, whose 10-year-old son Oisin raised the alarm when James got in to difficulty, said the fatality was an accident waiting to happen.

“It could have been any child that was out playing. We are all deeply saddened by this little child’s passing. It is terrible. I don’t know what is going to be done about this hazard.”

Bishop of Cloyne William Crean also expressed his sadness at the boy’s death.

“My heart goes out to all concerned: to the parents of James, to his extended family, relatives, friends and to the community of Midleton parish.

“On behalf of the people and priests of the Diocese of Cloyne, I offer my sincere and heartfelt condolences and I ask for prayers for all those who are grieving.”

James is survived by his parents Edel Casey and Paul Butler. His funeral arrangements have yet to be finalised.