Dáil protest hears measure will hurt marginalised learners the most 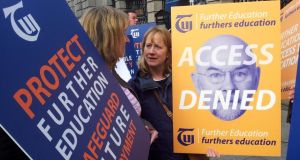 Protesters outside Leinster House called for a reversal of a move to increase the pupil to teacher ratio introduced in last December’s Budget. Photograph: Éanna Ó Caollaí/The Irish Times

Government plans to increase the student to teacher ratio in the further education sector will result in the loss of up to 100 teachers in Dublin and 400 teachers nationally, a protest in Dublin heard today.

The move to increase the ratio from 17:1 to 19:1 at further education and post-Leaving Certificate (FE/PLC) colleges was announced by Minster for Education Ruairi Quinn as part of Budget 2012 last December and will lead to a saving of an estimated EURO 12 million.

Teachers, students and parents outlined their concerns at today's protest with many emphasising that some of the most marginalised learners in the education system will be adversly affected. Calling on Minister Quinn to engage with the sector, Helen Mahony of the TUI said the increase in pupil-teacher ratio will make teachers redundant "by stealth".

Speaking ahead of the protest, Mick McCann of Coláiste Dhúlaigh said the loss of teachers will be "devastating". He said the FE/PLC sector appeals to students who might not be able to afford third level education or who may not have scored enough points in their Leaving Certificate. Describing the courses offered by Coláiste Dhúlaigh as "high end at low cost," Mr McCann said FE/PLC courses serve as "pathways" for students in order to progress to third level.

"The door of further education is closing on many people. And these are the people who are the poorest and most vulnerable. We need to open that door and give people some hope so they can actually have a life," Mr McCann said.

Author Rachel Moran said her experience of Further Education gave her an opportunity to "reach for something better" after years of cocaine addiction.

"Had that course not been available to me, I don't even want to imagine the impact that would have had on my life," she said. Ms Moran subsequently went on to study for a degree in journalism at Dublin City University where she won the Hybrid Award for excellence in journalism.

Addressing the estimated 200 protesters outside Leinster House, TUI vice president Gerry Quinn said cracks were now appearing in the austerity agenda "right across Europe and here in Ireland". He said the issue surrounding cuts in the FE/PLC sector was "a central part of the education problem that we have as a result of the austerity agenda."

Calling on other public sector unions to "hold the line" on the rejection of the Croke Park proposals, Mr Quinn said the Government has already approved the cuts for this year "so the whole basis for any proposed talks is faulty, it's a trap and we should ensure that trade unions across the public sector hold the line because we have given enough."

Mr Devine said the loss of specialist expertise would have a devastating effect. “We would lose nine to ten teachers...Some of the courses we would lose would be a specialist music rock school, a pre-nursing class, at least one if not two or three animation classes.”

“If you lost one specialist you lose the whole show.”

Emma Mahony, a student of dance at Inchicore College of Further Education, said the loss of specialist teachers will reduce the number of places on the course and the number of hours students will be able to spend in the studio with teachers. “This means that they won’t reach their full physical capability and won’t be employable as dancers.”

“People are going to be forced on the dole and that is such a waste of talent.”