‘People, in any version of EU, require much more than being allowed to survive’ - President 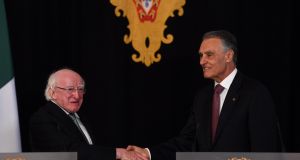 The European Union is in danger of neglecting the principle of social cohesion enshrined in its treaties, President Michael D Higgins has said, describing youth unemployment as the biggest challenge facing the EU today.

Speaking on the second day of a State visit to Portugal, Mr Higgins said all citizens of Ireland, Portugal and the EU deserved to live above a “social floor”.

“People, in any version of the European Union, require much more than being allowed to survive. This is in all the founding statements of the Union, in particular treaties like the Lisbon Treaty.

“The Lisbon Treaty balanced cohesion at a parity with competitiveness... This has been lost to some extent.”

Addressing business leaders in Lisbon on Thursday, Mr Higgins highlighted Ireland’s success in reducing the public deficit, and welcomed the fact that job creation was occurring in 12 of the 14 main sectors of the economy.

But the challenge of unemployment and every citizen’s right to “decent work” as defined by the International Labour Organisation (ILO) still needed to be addressed.

There was also an institutional challenge within the EU he said. “If you are integrating institutions, if you are saying that countries, let’s say of the 28, who are pooling sovereignty to achieve something greater than what they could achieve individually, it is possible to move at a faster pace institutionally but lose the people... you have to achieve a social integration that requires a connection with the European street.”

More than 120 representatives from the Portuguese and Irish business sphere attended the event attended by Enterprise Ireland, the IDA and Bord Bia, including senior figures from the telecoms, IT, construction and hospitality sectors.

Ireland had exports of €325 million to Portugal last year, a figure expected to rise this year.

Portugal is Ireland’s 11th highest trading partner within the 28 member-state EU. The country is also the second most popular destination for Irish tourists, with some 750,000 Irish people visiting annually.

Mr Higgins and his wife Sabina, who are travelling to Porto on Friday, were welcomed at the Portuguese parliament where they met with the president of the National Assembly and representatives of each of the political parties.

They visited the Bom Sucesso convent and school where Irish Dominican sisters have been in residence continuously since the 17th century.