Young back marriage equality but less keen on voting – report 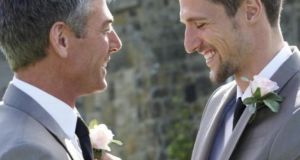 Only 6% of young people agree that “the referendum has an impact on existing marriage between a man and a woman”. Photograph: Getty Images

Some 90 per cent of 18- to 35-year-olds say they would vote Yes in the same sex marriage referendum, but only 55 per cent say they are likely to cast a ballot on May 22nd.

Some 1,000 young people across the State were surveyed for the “Youth and Marriage Equality” report by the marketing agency Thinkhouse.

Some 94 per cent agreed with the statement “Marriage Equality supports a fair and equal Ireland where all people are treated the same”.

“We wanted to get a sense of what youth feel about the referendum. This is the biggest civil rights movement of this generation and it is important for us to see how young people feel about it,” Elaine Verdon of Thinkhouse said.

The report was not funded by any interest group or organisation involved in the referendum, Ms Verdon said.

Only 6 per cent of young people agreed that “the referendum has an impact on existing marriage between a man and a woman”, while 40 per cent said that the referendum will “have an effect on children”.

The survey found that 66 per cent of respondents agreed with the statement “the Marriage Equality referendum will impact the rights of same-sex couples as parents.”

Some 81 per cent of respondents said they were a registered voter, with one in four saying they are interested in Irish politics.

Some 53 per cent said they voted in the last general election.

When asked which political party they would give their first preference vote to in an election, 42 per cent were undecided, 21 per cent said they would “vote for an independent”.

When it comes to seeking information on the referendum, 18- to 35-year-olds rank social media highest as a source (77 per cent), followed by family and friends at 60 per cent.

We will have to see whether the passion of young people on social media reaches the ballot box, said Verdon. “I think it is easy to say something, but acting on it is totally different.”

When asked ‘How many referendums are taking place on May 22nd?’ one in five of those surveyed assumed they would be asked to vote on one referendum, not two.

Some 32 per cent of respondents said they “feel the Government does not care about their opinions” and Ms Verdon says that this disaffection may affect the outcome of the referendums as “a lot of young people say they are not voting because they are annoyed at the Government .”

Young people want to see change, said Ms Verdon, even if they may struggle getting out to vote. “Marriage equality matters to young people, so the 55 per cent figure of those who say they will vote may go up by May 22nd,” she said.

“Whether it’s yes or no, people should exercise their right to vote.”

Meanwhile, the National Youth Council of Ireland (NYCI) is urging young people to make sure they have registered to vote in time for the referendums before the deadline on Tuesday. It estimates that some 120,000 18- to 25-year- olds are not registered.