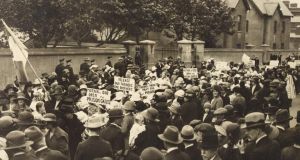 Details of the role women played in the key conflicts in Ireland from 1916 to 1923 were unveiled in military service pension files released yesterday. Mná na hÉireann got up to quite a lot during the war, it seems.

“There are still many, many women’s files in our boxes in the collection awaiting attention. We’re finding them every day, some more startling in the service they provided to the independence movement,” said Cécile Gordon, an archivist at the Military Archives of Ireland. “The role of women during this period is finally getting redefined.”

The files are rich with fresh voices. Some 176 files of female applicants for military pensions have been released in this new tranche.

The significance of the role women played is not being lost. “Fifty years before the present Defence Forces talked about getting women into the Irish Army, Michael Collins was already doing it with the IRA in the War of Independence,” said Patrick Brennan, project manager of the Military Service Pensions Collection at Cathal Brugha barracks.

The files relate to applications made under the Military Service Pensions Act, 1934. It was nearly impossible for any woman to qualify for a pension under the Act of 1924. Cumann na mBan, the “organisation of women founded to advance the cause of Irish liberty”, was not covered by the legislation.

Military activities By the 1934 Act, however, Cumann na mBan was listed as a qualifying organisation.

Yet the types of activities that qualified an applicant, namely “activities of a military nature”, still disqualified many women who had been engaged in activities such as first-aid classes, drilling and maintenance of weapons.

Many of the tasks women had assumed from 1916 to 1923 included keeping safe houses for IRA purposes, hiding and moving arms and explosives, and providing food and shelter for IRA columns and active service units. Of the 176 pension cases investigated and released this week, 166 were for members of Cumann na mBan who were found to have been actively engaged in these activities.

Among the applicants was Kathleen O’Connell, who emigrated to the US from Co Kerry in 1904 and went on to work as secretary to Éamon de Valera and Harry Boland in New York. On returning in 1921, she worked for de Valera.

Her testimony states that she carried dispatches between Harry Boland and Michael Collins during the civil war.