Northern state papers 1987: ‘Some groups did not wish to be associated with Sinn Féin’ 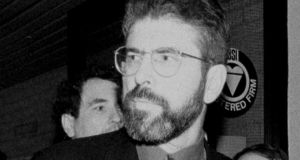 A senior Irish-language poet from west Belfast voiced doubts about the linguistic proficiency of an Irish-language deputation to the Northern Ireland Arts Council in 1985, and doubted the capacity of Sinn Féin to advise on Irish.

As the campaign for greater recognition of Irish intensified following the Anglo-Irish Agreement, Gerry Adams (pictured), as Sinn Féin MP for West Belfast, led a delegation of language activists to the Arts Council on April 22nd, 1986. They met the council’s director, Ken Jamison, and the then traditional arts officer, Ciaran Carson. Mr Carson is now professor of poetry at Queen’s University Belfast.

The Sinn Féin president referred to the “resurgence” of Irish, especially in west Belfast, and put this in the context of a European concern for lesser-used languages. He said the Northern Ireland Office had declined to make any special provision for Irish.

In a memo assessing the deputation which was circulated to officials, Mr Carson made two observations. First, “the delegation was not fully representative of the Irish-language movement in west Belfast. Neither Cluain Ard, the traditional focal point of the language, nor the Shaw’s Road Gaeltacht was represented”.

This suggested to him that “some groups did not wish to be associated with Sinn Féin”.

Mr Carson was also critical of the linguistic proficiency of the delegation, telling officials: “Most of those present seem to have a barely competent grasp of the phonetics of the language. It is hardly our place to help them brush up their Irish, but it might be our role to make them aware of the wider cultural implications of the language.”

Finally, he doubted Sinn Féin’s “capacity to advise on these matters”.

The Irish language also surfaces in declassified papers relating to conditions at the Maze Prison.A complaint by the prominent human rights campaigner and prison chaplain, Fr (now Msgr) Raymond Murray that he was ordered to stop speaking in Irish during a pastoral visit to the prison in 1985 had reverberations on the Anglo-Irish front, the files reveal.

The prison governor admitted that, although the cubicles were used for legal visits, they were not soundproof and conversations could be overheard. The NIO prison regime’s official wrote to Fr Murray apologising for the incident on December 16th, 1985.