Union of students says it was involved in registering more than 27,633 voters 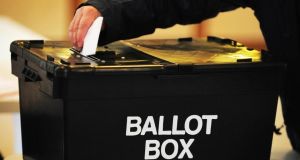 Councils across the State have reported busy days ahead of today’s deadline to register to vote in the forthcoming referendums. Photograph: Rui Vieira/PA Wire

A late surge in voter registration has taken place across the State on the last day on which people can register to vote in the upcoming referendums on same-sex marriage and the lowering of the presidential age.

At Limerick City and County Council offices, staff said that “phones were hopping” and that they were “rushed off their feet”, as the 5pm deadline for registration loomed.

Council staff said that, while last week was busy, today was “unbelievable”.

“There has been a huge surge of interest and well over 1,000 applications have now been received to go on the supplementary register,” a spokeswoman confirmed.

The spokeswoman indicated that the level of interest in registering to vote was greater than the level at this stage ahead of last year’s local elections.

Unregistered voters had until 5pm today to drop forms into their local council offices, after getting them signed and stamped at local Garda stations.

Cork City Council’s franchise office was described as “very busy” today, while a spokeswoman for Waterford City and County Council said: “We certainly have a busy day today.”

At Galway City Council’s offices, a garda was present at the customer service desk to sign and stamp an “unprecedented” number of forms after checking ID.

“We’ve had a huge influx of people. It was busy last week but particularly this afternoon,” a council spokesman said.

“It was a very young crowd, a lot of students moving their votes from home to Galway.

“In very rough terms, before the local elections we would have processed about 300 forms. This looks like about four times that at least. It’s unprecedented.”

In Dublin, Fingal County Council also reported a busy day, while South Dublin County Council recorded an “unprecedented” increase in the numbers of applications for inclusion on the supplementary register.

“The numbers are increasing every day and as at close of business today we had received 1,025 in one day, which is extremely high,” a spokeswoman said.

As the cut-off for the registration of voters passed at 5pm, the Union of Students in Ireland (USI) said the student movement was involved in directly registering at least 27,633 voters.

According to USI president, Laura Harmon, the number of voters directly registered by students’ unions was: 8,550 in the Dublin region; 10,439 in the Border, Midlands and Western region; 8,644 in the Southern region.