Varadkar says he ‘committed no offence’ over leaked document 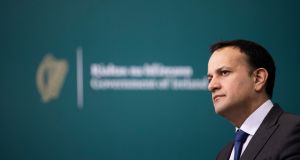 Tánaiste Leo Varadkar: ‘The facts are no different to those set out by me in the Dáil last November.’ Photograph: Julien Behal

Tánaiste Leo Varadkar has offered to meet gardaí to assist them with their preliminary inquiries into the leaking of a confidential document.

Mr Varadkar said his legal advice was that he had “committed no offence” and that he was willing to provide a “full statement” on the circumstances surrounding the leaking of a copy of a newly negotiated contract for GPs in April 2019.

“I am aware that a complaint was made against me last November. This was widely reported at the time,” Mr Varadkar said.

“The gardaí have to do their job and investigate that complaint. I would expect nothing else. They have not been in contact with me about the matter, but I have, through my solicitors, made contact with them and I have offered to meet with them, answer any questions they may have, and provide a full statement on the matter.

“The facts are no different to those set out by me in the Dáil last November. My legal advice is that I have committed no offence. I look forward to the matter being concluded. Given the circumstances, I won’t be making any further comment.”

Detectives have already spoken to Minister for Higher Education Simon Harris about the matter and have taken a written statement from him.

It is understood Mr Harris spoke to detectives on January 21st. He voluntarily made a written statement and did not attend a Garda station. There is no suggestion Mr Harris has committed an offence.

A spokeswoman for Mr Harris said: “The Minister cannot comment on an ongoing Garda investigation.”

Mr Harris was minister for health at the time. Detectives are also conducting interviews with staff in the Department of Health.

Garda sources stressed a full criminal investigation has not been opened into Mr Varadkar’s action.

Detectives from the National Bureau of Criminal Investigation, under the direction of Assistant Commissioner John O’Driscoll, are conducting what sources have described as “preliminary inquiries” into whether an offence may have been committed under the Official Secrets Act.

The inquiries focus on allegations that in April 2019, Mr Varadkar, who was then taoiseach, improperly leaked a confidential copy of the proposed contract to a friend, Dr Maitiú Ó Tuathail.

The contract contained details of the deal the government had provisionally agreed with the Irish Medical Organisation (IMO). At the time, Mr Ó Tuathail was president of the now-defunct National Association of GPs, a rival organisation.

The official Garda statement has not changed since it emerged a criminal complaint had been received about the matter last year.

An informed source said the preliminary assessment of the criminal complaint would involve speaking to Mr Varadkar in a similar fashion, likely to be in the next few weeks.

Mr Varadkar will not be interviewed under caution and will not have to attend at a station, the source said, adding “this is quite standard practice at this stage of an investigation”.

The Official Secrets Act makes it an offence for “a public official” to leak documents of a sensitive nature. Mr Varadkar previously said public officials do not include TDs and senators under the Act.