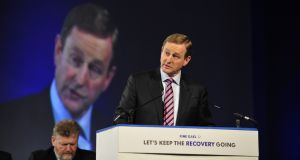 Taoiseach Enda Kenny told Fine Gael Ardfheis in City West Dublin the election would be a choice “between a clear plan to keep the recovery going; or putting the people’s hard-won progress at risk”. Photograph: Aidan Crawley

Fine Gael will today pledge to give greater financial assistance to the middle classes to pay for the cost of medication if re-elected to government.

The party’s ardfheis at the Citywest Hotel in Dublin will also hear proposals to introduce tougher sentences for repeat offenders.

Minister for Health Leo Varadkar will propose a new measure to reform the existing State subsidies that are in place to offset the cost of drugs and medicines for those with a chronic disease or diseases.

At present, people without a medical card have to pay the first €140 a month towards the cost of their drugs and medicines before the State begins to pay the bill under the drug payment scheme.

For patients with chronic illnesses who require drugs and medicines regularly, this can lead to them having to pay as much as €1,680 a year.

Mr Varadkar will tell a session on health: “We will introduce the next phases of universal healthcare in a second term, including free GP care for all children, a new scheme to lower the cost of medicines, a new focus on managing chronic disease in the community rather than in hospitals, and enhanced homecare provision to keep people in their own homes for longer.”

While the other proposals have already been announced, the move on medicine costs is new. However, sources said the final detail of the proposal has yet to be worked out.

It will follow the same path as recent burglary legislation, which saw the introduction of consecutive sentences.

Ms Fitzgerald said Fine Gael will make it a priority to tackle repeat offending and will incorporate robbery, assault and firearms offences in the new legislation.

She will also seek to enact another Bill providing for the increased use of supervised sanctions for non-violent offenders.

Meanwhile, Minister for Finance Michael Noonan has insisted Fine Gael entering coalition with Fianna Fáil will not be necessary after the general election.

Mr Noonan said: “I have full confidence that the Fianna Fáil option will never arise because the public will re-elect the present Government”.

“Our proposition to the electorate is to re-elect the present Government, and we’re not thinking outside that space. We’re going to make sure during the campaign that the numbers do stack up.”

Addressing the ardfheis, Taoiseach Enda Kenny said Fianna Fáil left the country in the depths of a crisis.

“I heard some incredulous comments last weekend when I heard them shamelessly claiming that what we really inherited from them was a plan. If that wreckage of a plan had been implemented, then the country would never have recovered, because their so-called plan would have been a total disaster.”

Mr Kenny said the upcoming election would be a choice “between a clear plan to keep the recovery going; or putting the people’s’ hard-won progress at risk by going back to those who wrecked the country in the past or to those whose populist promises would wreck our future by blowing a huge hole in the national finances”.

Over 3,000 delegates are to attend the conference this weekend.

1 Over 2,000 buyers bid for first affordable homes planned for south Dublin in years
2 Storm Dennis washes abandoned ‘ghost ship’ onto rocks off Co Cork
3 Forget a grand coalition – here is what the next government will most likely look like
4 Caroline Flack death: Public disquiet over media conduct grows
5 Fine Gael faces internal resistance to a grand coalition with FF and Greens
Real news has value SUBSCRIBE