UUP rules out pact with Conservatives 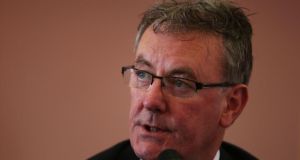 UUP leader Mike Nesbitt: “Taxing carers’ allowances, that would be a red line for us.” Photograph: Brian Lawless/PA Wire

Following a meeting in Westminster, Ulster Unionist Party leader Mike Nesbitt said Mr Cameron enjoyed a “slim” majority. “Moving down the line that will become more and more fragile as the mandate wears on.”

However, Mr Nesbitt said the UUP MPs, Danny Kinahan and Tom Elliott, would not back future efforts to cut the welfare budget, particularly if the Conservatives went ahead with a bid to tax carers’ allowances.

“He understands that I have a focus now on the Assembly elections next year. There may be things that he is hoping to do with his mandate which would not be attractive to the UUP,” Mr Nesbitt told The Irish Times.

“If he is going to tax carers’ allowances, that would be a red line for us. We could not support that. The work that they do that would otherwise fall to the National Health Service is worth billions.”

“I urged him not to step in, not to fold or suspend Stormont, because it seems to me that that would suit Sinn Féin if he were to step in. They could continue to look at the Southern electorate and say, ‘Look at us, we stood firm against the Tories, we resisted austerity, we said no to welfare cuts’.”

Northern Ireland is already facing £2 million a week in fines for not implementing UK-ordered welfare reforms.