Unemployed: Being out of work is demoralising, especially when you keep hearing about ‘recovery’

Meet the Voters: Kevin Flaherty has not worked since construction sector collapsed in 2009 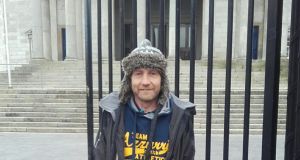 Kevin Flaherty believes he will spend the next 20 or 30 years ‘until I get my pension scratching out a living for myself’.

This article is part of The Irish Times Meet the Voters series, profiling ten sample voters in a bid to track the impact of the 2016 General Election campaign on their voting intentions.

I grew up in the countryside in Kilkenny and moved into the town about 10 years ago. I’m a father of three girls, the youngest of whom I co-parent with my ex-partner.

Before the crash happened, I worked mostly in construction. I was working in a brick factory in Castlecomer for a few years, and then I was self-employed, sub-contracted to Sierra installing Sky TV around Kilkenny. When the building trade collapsed, most of my work was in new houses and apartments. The work slowed to a trickle and with the cost of insurance, I couldn’t afford to keep my van on the road. So I became unemployed then in late 2009. I haven’t worked since.

Long-term unemployment has wide-ranging effects. During the boom, I was working up to seven days a week. I was never out of work. Unemployment came very suddenly and it was a big shock. I was close to breakdown in those first two years.

I started a degree course in humanities in 2010 as part of the Back to Education scheme at St Patrick’s College in Carlow. It was a big commitment as I was €40 down every week getting up and down on the train.

I wanted to do teaching, but while I was studying they changed the parameters for the HDip, and now you have to do two extra years rather than one, which I can’t afford.

So since I graduated last year I’ve been trying to find employment. I’m looking for anything at all, which feels like a huge waste of the four years I’ve spent studying. It’s tough for everyone I suppose.

You get so many knockbacks, it is very hard to stay positive. It is very demoralising, and I think it is even tougher when you keep hearing about a “recovery”. My core group of friends all worked during the boom, but a lot of them are in the same position as me now. I reckon I will spend the next 20 or 30 years until I get my pension scratching out a living for myself. I never thought that would be the way.

I’m out of the house most days looking for work for the past six months. I’ve sent out about 100 CVs, but rarely get a response. There are a lot more courses I could do, but I feel I’ve done enough after four years in college. I want a job that pays me a wage.

I think I’m going to have to do an internship to get some office experience, so I’ve applied for a few of those in the past few weeks.

I have been deeply disappointed with the performance of this Government. I expected no different from Fine Gael, they are very much the Tory Party of Ireland which looks after the guys at the top, but I was hoping for much more from Labour.

From what I can see, austerity has meant a transfer of wealth from poor to rich. The one question I think everyone should be asking the candidates on the door over the next few weeks is “how has austerity affected you?” I don’t think it has affected any of the people making the decisions. Fine Gael promised a revolution in democracy but they threw that plan in the bin the day after they were elected.

The recovery is affecting certain sections of society only. There are more houses going up in Kilkenny again, but then you walk down the high street and see businesses that have been thriving in the town for 40 or 50 years and they are closing down.

The hotels seem to be doing well again, which is good because tourism is so important to Kilkenny. But a lot of my friends work in the hotel industry, and their conditions and wages and hours are terrible.

Housing is a big issue which will affect my vote. I live alone in a one-bed apartment; well that’s what the Daft ad calls it, but it is really a glorified bedsit. It is cheap though, €110 per week. I had a lovely house two years ago, but a bad storm blew the roof off.

Because I take my daughter every weekend I was under pressure to find somewhere, so I had to take this place. I’ve been stuck here since because there is so much competition for housing. My daughter has to sleep in my bed, when she’s at an age where she should have her own room.

A two-bed house would be at least €700, but the maximum rent allowance I can get is €550 so I think I’m stuck here until I find work. I hope when I get a job I will be able to afford a car, and we can move a bit out of town where we’d get a bigger house.

Kilkenny has an acute shortage of houses, but there are dozens of council houses which have been boarded up for years. Lots of private houses and office blocks are being built now but no social housing. Nama is selling off houses to private investors, when taxpayers are going to have to spend hundreds of thousands per unit on portacabins to house people. To me that makes no sense at all.

The big local issue that concerns me is the brewery site in Kilkenny, which was sold to Kilkenny County Council when Smithwicks closed two years ago. They are building three office blocks with a street through it, but that’s not solving any housing problem.

To be fair though, I think John McGuinness has done great things for the working class people of Kilkenny over the years.

Since the downturn my interest in politics has grown. I watch all the political shows on television now, but there is a strong anti-Sinn Féin bias which I find hard to take. A lot of us got involved in a local protest last year against the bridge in Kilkenny, and through that I have developed a network of like-minded people and we share information and opinions on social media. I go to all the local public meetings, and the council meetings.

In the Carlow-Kilkenny by-election last year I voted for Adrienne Wallace of People Before Profit. I know her personally and I like what People Before Profit stand for. Kathleen Funchion of Sinn Féin got my number two, but I think she’ll get my first preference this time. If we want real change, I think Sinn Féin is our only option. I am disillusioned with politics, like a lot of other people in this country. But we have to give them a chance to do what they have promised.

Kevin Flaherty was in conversation with Ciara Kenny