Una Mullally: Decency of Irish not limited to liberal Dublin

This is also about people who never made it this far, the shoulders we are all standing on 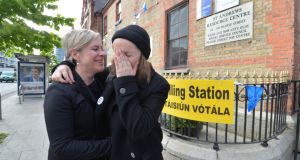 We knew it by Friday afternoon. This referendum was always going to live or die on turnout.

A high turnout would mean the dedicated base of No voters would be overwhelmed. In the final couple of weeks of the campaign, it was really about getting the vote out.

When friends were coming back from canvasses in Tallaght saying everyone was positive on the doors, when friends were flying home from Toronto and San Francisco and Turkey, when stories of grandparents voting Yes were told, when the dozen that used to show up for a canvass turned into over a hundred, when people were registering to vote in their droves, when the queues were forming outside polling stations.

When all of that was happening, across the country, Yes Equality volunteers looked at each other and thought, “how can we not win”?

This was no divorce referendum. This was a new Ireland.

And this Ireland, when presented with a simple question, gave it a simple answer.

Why not? Live and let live.

That generosity the Yes Equality campaign was depending on came through. The decency of the Irish people was not limited to the liberal leafy suburbs of Dublin, nor the solidarity from the flats, but that decency came from the cliffs of Donegal, the lakes of Cavan, the farmyards of Kildare, the lanes of Kerry.

While there is no doubt that certain politicians deserve applause for their work during the campaign, this was a people’s campaign. The work on the ground was by and large done by regular citizens, who had nothing to gain other than the betterment of society. Night after night people hit the doors. Day after day they did every single thing they could to get this over the line.

And even as I’m writing, friends new and old who are reaching a point of exhaustion are still working, leaning over the barriers in the RDS taking the tallies. If you want examples of active citizenship, if you want to learn about the spirit of volunteerism, if you want to see democracy in action, then this is the campaign for you.

But it wasn’t just about gay people. A lot of straight Irish people just wanted to be given the opportunity to show that they were not prejudiced, that they had no issue with people who were gay having their relationships recognised, that they wanted to live in a country where all citizens were valued equally.

I burst into tears after I voted yesterday. The stress of the last few months came pouring out.

But there is an elation in the air today. The rest of my tears shed today will be tears of joy. And in Fairview Park, gay people silently left flowers and candles for Declan Flynn, beaten to death by young lads because they thought he was gay, 33 years ago.

Because it’s also about the people who never made it this far, the shoulders that we are all standing on today.