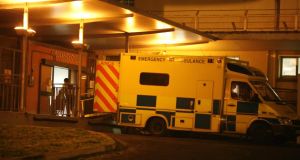 The EU-IMF troika is growing increasingly concerned about the slow pace of key health reforms as the Government enters the final phase of the bailout.

Although the troika is confident that the Coalition will regain full access to private debt markets later this year, there is anxiety that the failure to realise health savings could rebound later on the Government and undermine confidence in the Irish recovery story.

As a result, the troika is pressing behind the scenes for further structural reforms to tackle rising health service costs. The development comes amid efforts to prevent a repeat of large health spending overruns last year, an initiative which is recognised in Government circles to be very challenging.

The international lenders have three central concerns: they believe consultants’ pay is still too high in Ireland; they want deep cuts on drug spending; and they are seeking action to impose charges on private patients in public hospital beds.

Each of these questions is riddled with difficulty for the Government, which faces a line of problems as it seeks to prise savings from the health system.

Pay of consultants
The troika’s concerns about consultants’ pay comes in the wake of the Haddington Road deal to cut public salaries.

However, the Government has long argued that it cannot legally take specific action to target one group of workers for significantly higher pay cuts than other groups.

Although legislation was finally enacted last month to facilitate greater use of cheaper generic drugs, there is uncertainty as to when the new system will be fully deployed and the extent of the likely savings.

While moves are promised to charge all private patients using public beds, health insurers say this could drive premiums up by 25 per cent or more and the State-owned VHI has warned the initiative could have implications for its viability.

The troika signalled concerns about the slow pace of health reforms a year ago, but the latest wave of pressure on the Government follows the lenders’ 10th review mission to Ireland last month.

Deeper analysis
Although the troika made only an oblique reference to health reforms in its press statement after the mission, a deeper analysis for the European authorities is in preparation and is scheduled for delivery in the middle of this month.

The European Commission said last week in a separate update on Ireland that health spending had increased significantly in recent years and should be contained.