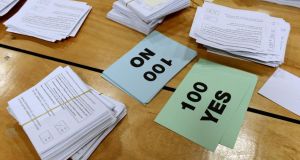 ‘Perhaps the biggest barrier to the use of the preferendum in Ireland is the fact that its introduction would first require a referendum to amend Article 46 of the Constitution (which would preclude its use at present). Photograph: David Sleator/The Irish Times

The Fine Gael/Labour coalition is fond of referendums on constitutional amendments. The previous record for an electoral cycle was eight referendums held by the Fianna Fáil/Progressive Democrats coalition between 1997 and 2002. Having already held six since 2011, the current Government looks set to eclipse this mark by holding up to six more next year.

However, there is one referendum that the Government definitely doesn’t want to hold, and it’s the one that’s currently in most demand on abortion. Pro-life and pro-choice activists don’t agree on much, but they both agree that a fresh referendum needs to be held on abortion.

So why won’t the Government hold one? The first problem is that the two sides are calling for different amendments to the Constitution. Pro-choice activists want to repeal the Eighth Amendment and liberalise Irish abortion laws. Pro-life advocates want to reverse the X case ruling allowing for abortion in cases of risk of suicide, thus making Irish abortion laws more restrictive.

The second problem is that our referendum system requires the Government to choose one or the other; it cannot offer both choices to voters in a single referendum. A Bill must be passed by the Oireachtas proposing a specific amendment to the Constitution. The people are then asked a simple Yes/No question as to its approval.

To hold a referendum, the Government must effectively nail its colours to the mast by voting to approve a particular amendment. It might claim to be a neutral facilitator of a referendum in some cases, but this is not possible here. The simple act of choosing which referendum to hold requires the Government to accede to the demands of one or other side of a polarised debate. No Irish government in the near future is likely to do this on abortion, making a fresh referendum highly unlikely in the short to medium term. Consequently, we are left with a constitutional position that has satisfied neither side of the debate for the past two decades.

The binary nature of our referendum system thus makes it less likely that certain referendums will be held at all, as many politicians prefer not to take a public stance on moral controversies like abortion. In addition, even where referendums are held, it limits the range of choice available to voters. Referendums ask voters to answer yes or no, but frequently, it is difficult to provide a simple yes or no answer to a complex political question.

Is there a way to offer voters more choice at referendums (that does not involve bringing sellotape to the polling booth)? The answer might lie in the “preferendum”, in which voters are given a choice between a menu of different options. The winning option can be chosen in a number of ways. It can be the one receiving the most votes (like first past-the-post voting); or voters can rank their choices in order (like in Irish elections), with the least-popular options being eliminated and votes transferred via subsequent preferences until one option has more than half of the votes.

In this scenario, you have been given a range of choices that allows for your nuanced position. Should any of options 2, 3 or 4 succeed, you are happy to support and accept it as you voted for it to some degree. Should one of the other two options succeed, you simply find yourself in the same position as a voter on the losing side of any referendum.

The preferendum model is very attractive for choices that do not easily distil down to a simple yes or no. It is regularly used in Switzerland, and has been used on occasion in New Zealand and Sweden. It would not have to be used for every constitutional amendment. Some issues could be kept to simple Yes/No choices, while the preferendum could be used for more complex issues.

Procedures could be set down governing how the choices are formulated. For example, it could be provided that once a preferendum has been initiated by a majority of the Dáil, a one-third vote in either or both Houses of the Oireachtas would suffice to qualify an option for the ballot paper, giving both the opposition and the Seanad a more meaningful role in constitutional reform.

Irish people are accustomed to accepting a government or president that received fewer than 50 per cent of first preferences, but a constitutional amendment as controversial as one that liberalised our abortion laws might suffer from a serious legitimacy deficit in the absence of demonstrable majority support.

Perhaps the biggest barrier to the use of the preferendum in Ireland is the fact that its introduction would first require a referendum to amend article 46 of the Constitution (which would preclude its use at present). The Constitution Review Group considered this possibility in 1996 but ultimately rejected it. Given the quantity and complexity of constitutional amendments coming before the people more recently, it might be time to revisit that discussion.