Opinion: We cannot understand Ireland’s participation in the conflict without reference to its relationship with Britain 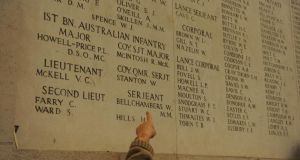 Those who tuned into ITV’s Champion’s League coverage on Tuesday night to catch a glimpse of the new Republic of Ireland management team could not fail to notice that both Martin O’Neill and Roy Keane were sporting poppies.

A decade ago the sight of a man from a nationalist background in Co Derry and a former Republic of Ireland captain wearing this symbol might have raised hackles, but these days it is barely commented on. Indeed, some increasingly see the poppy as a way of commemorating Irish relatives who served in the Great War.

The instinct to remember is understandable. Among the 20,000 dead on the day the last great German offensive of the war began in March 1918 was Pte Michael Leahy from Caherconlish in east Limerick. I remember how pleased my grandaunt was when I gave her a copy of the entry recording her uncle’s death from Ireland’s memorial records. For her this was a real connection with a long-lost family member.

More than 200,000 Irish men served and over 30,000 died in the first World War. There is no doubt that the conflict was central to the shaping of Ireland over the next decade. Without it there would have been no Easter Rising. But understanding the importance of the war should not mean embracing a strange soft-focus view of sacrifice, symbolised in many ways by the poppy, that avoids the real issues behind Ireland’s involvement.

Firstly, it is important to stress that the poppy commemorates not just the dead of the world wars but all British military losses since 1914. Many who have no problem with commemorating Great War dead justifiably baulk at honouring those who served in Britain’s colonial and post-colonial dirty wars.

One of the reasons the flower is so omnipresent at this time of year is because it is practically compulsory for those in the public eye in the UK. What one historian has called “poppyganda” is part of a renewed militarisation of British public life. As a group of British veterans of the Iraq war complained two years ago, the build-up to Armistice Day now amounts to “a month-long drum roll of support for current wars”.

Jingoistic and reactionary
The poppy has not always been so prominent as a symbol of remembrance. Historian Padraig Yeates, who grew up in Birmingham, recalls how his father, decorated during the second World War, “never wore a poppy and anyone I knew who served with him never wore a poppy”.

“They regarded it, and the British Legion, as symbolising all that was worst, most jingoistic and reactionary in the British establishment.”

Part of the renewed interest in the Great War in Ireland is based on a desire to promote reconciliation. Because both Irish nationalists and unionists served together, the argument goes, this understanding will help promote peace today.

But this ignores the reality that many of those men joined up for opposing reasons, hoping to prevent or to guarantee Home Rule, or to gain military experience.

There is little evidence to suggest they abandoned their antipathy post-war. Veterans would soon confront each other as IRA volunteers, Black and Tans, B-Specials and Free State soldiers.

In Belfast ex-servicemen from nationalist backgrounds would be driven from their homes by loyalists.

Motivations varied for many recruits. The future IRA leader Tom Barry was honest enough to admit that he went “for no other reason than to see what war was like, to get a gun, to see new countries and to feel like a grown man”.

Others were driven by economic imperatives. In August 1914, Jim Larkin’s Irish Worker lamented that “several of our best comrades are leaving the North Wall to fight for the glory of England”. By 1915 perhaps 2,500 transport union members were in British uniform.

There they found that class still mattered. A recruiting officer of the Royal Dublin Fusiliers complained that “men . . . of education and refinement” were reluctant to enlist because “they did not care to be mixed up with . . . corner boys”.

British officials lamented that “this class prejudice is probably much more pronounced in Ireland than elsewhere in the United Kingdom”. But there is little recognition of issues such as this in all the commentary about “shared” sacrifices.

Much of what is claimed about “shared history” in Ireland suggests a commemorative trade-off, whereby nationalists celebrate the Easter Rising, unionists the Somme, and both sides congratulate each other on their maturity.

The issues that divided Irish people in 1914 are glossed over, and the role of Britain virtually ignored.

But we cannot understand participation in the war without reference to Ireland’s relationship with Britain. There was no Irish parliament with a mandate to authorise “our” participation. These life and death decisions were taken by a British government, which stationed 30,000 troops in Ireland and governed ultimately by its ability to deploy them.

Irish republicanism
It is ironic that many of those who promote the memory of the Great War are critics of Irish republicanism. Yet far more Irish people died between 1914 and 1918 than in any conflict on Irish soil in the last century. By appealing for support for the British war effort, John Redmond and Edward Carson sent many more Irish men out to die than any Irish republican leader.

Large numbers of Irish people never embraced the war and recruitment was declining even before Easter 1916. One of the most significant moments in Ireland’s war came in April 1918 when a general strike ended the threat of conscription.

When remembering the dead of the Great War we should also commemorate those who resisted it and who hoped that a new world would emerge in which such slaughter would never occur again.

Embracing the fuzzy nostalgia of the poppy only encourages those who want to justify that war – and others.

Brian Hanley is a historian and author