The election that wasn’t: how the plan for a directly elected Dublin mayor could be revived

Opinion: Why Fingal Co Council delivered the sting in the tail 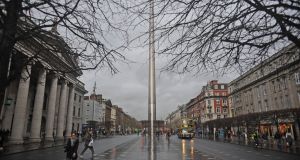 In Ireland what we need first and foremost is a proper debate on the concept of directly elected mayors and we need to know the precise details of the model that is being proposed. Photograph: Dara Mac Dónaill/The Irish Times

Phil Hogan’s Local Government Reform Act 2014 has received little attention or public scrutiny. However, the one issue that has got pulses racing – at least in Dublin – is the proposal to have a directly elected mayor for the capital. This is not a new idea. The Local Government Act 2001 proposed that direct mayoral elections would take place in 2004, but the government repealed the decision through legislation in 2003.

A Green Paper by John Gormley in 2008 again recommended directly elected mayors, but the initiative never saw the legislative light of day during the lifetime of that government. However, Minister for the Environment Phil Hogan relaunched the idea by providing for a directly elected mayor for the Dublin metropolitan area in the 2014 Reform Act.

The legislation proposed the holding of a Dublin plebiscite on the issue on the same day as the 2014 local elections – yesterday. Controversially, however, the Minister included a provision that each of the four local authorities that constitute the Dublin metropolitan area – Dublin City Council, Dún Laoghaire-Rathdown County Council, Fingal County Council and South Dublin County Council – would first have to individually adopt a resolution in favour of holding the plebiscite.

The process began on March 24th when Dublin City Council approved it with 50 votes in favour and none against. A week later, on March 31st, the remaining three councils met to decide the fate of the mayoral plebiscite. The vote in South Dublin County Council was 19 in favour with 3 against; in Dún Laoghaire-Rathdown County Council the elected members voted decisively in favour by 23 to zero.

The sting in the tail, however, was spectacularly delivered by the members of Fingal County Council, who voted against the holding of the plebiscite by 16 votes to six. Accordingly, as things stand, the proposal is dead in the water. Advocates of the directly elected mayor idea are appalled by the fact that the plebiscite has been blocked despite the overwhelming majority of councillors in Dublin voting in favour. The combined total vote was 98-19 in favour, and yet the minority of councillors against the proposal have succeeded in scuppering it.

Minister for the Environment Phil Hogan is firmly in the spotlight. Surely the decision to have a directly elected mayor should have been put in the hands of the citizens of Dublin? Placing an extra unnecessary obstacle into the process suggests the Minister’s commitment to the concept is half-hearted at best.

While I am in favour of a plebiscite by the citizens, I think it would be wrong to scapegoat the elected members of Fingal County Council. Cllr Gerry McGuire of the Labour Party was one of those who voted against; he argued that any directly elected mayor would be based in the city and would ignore rural Dublin, including the residents of Fingal. He added that the Local Government Reform Act 2014 did not provide enough detail about the role and powers of the mayor and so people would not know precisely what they were voting on. I think this latter point is valid and deserves some attention.

There is a tendency to lazily refer to the London mayor without necessarily realising the structure that is in place. Boris Johnson is a directly elected mayor who heads an elected 25-member assembly. Underneath this there are 32 London borough councils and the city of London corporation.

The latter organisation is led by Cllr Fiona Woolf, who is the lord mayor of London. I am not sure the complexities of this are understood by people who say that Dublin should have a directly elected mayor “just like they do in London”.

In general terms, nobody can honestly say the UK experiment with directly elected mayors has been a success, given that the majority of cities which held referendums voted against having mayors. Respected academic Kevin Orr has claimed mayoral referendums and elections in the UK have not raised the visibility of local government, except in “faintly embarrassing ways”. Over the past few years, cities such as Hartlepool have decided to drop the directly elected mayor model. And in the US more and more cities, counties and towns are shifting to the council-manager model.

Ultimately, as Cllr McGuire suggested, it does come down to vital details such as the power and responsibilities of the directly elected mayor and the relationship between the mayor and the local legislature, ie the council(s). Directly elected mayors with executive powers can make quicker decisions and cut through much of the traditional internal local government bureaucracy – the flip side is there is a grave danger in placing too much power in the hands of one individual.

In 2006 I remember interviewing the Mayor of Schenectady (New York), Brian Stratton, who made a very persuasive case to me for directly elected mayors. He said that when he was elected mayor he inherited a fiscal train wreck but was able to turn things around because he had immense executive powers. What he failed to mention was that the fiscal train wreck had been caused by the previous directly elected mayor who had bankrupted the city with a massive deficit and a rock-bottom credit rating.

Many directly elected mayors in the US have veto power over the council and are all-powerful. When I asked the mayor of Albany, Gerald Jennings, about his relationship with his council, he laughed and said: “I’m not obliged to go to council meetings, thank God.”

In Ireland what we need first and foremost is a proper debate on the concept of directly elected mayors and we need to know the precise details of the model that is being proposed. Then an informed decision can be made by citizens. While the statutory requirement under the 2014 Act to hold a plebiscite on May 23rd was not met, new proposals can be developed for the best governance arrangements for metropolitan Dublin.

Phil Hogan has already opened the door to this possibility by saying that options can be discussed after the local elections when new councils are in place. For example, Labour’s Emer Costello has called for a convention for Dublin where members of the four local authorities and citizens can discuss how Dublin should be governed.

This proposal is now scrapped, having been dragged down at the first hurdle. However, it will appear again in the not-too-distant future. In the meantime, we have an opportunity to work out the details of how the office of mayor would work so that we can all know what we are talking about.