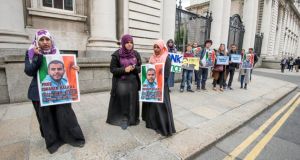 They were informed at a meeting with his father and two of his sisters and appealed for him to reconsider. Mr Halawa’s decision to go on hunger strike, in a move designed to highlight his plight in Egyptian custody where he has been since August 2013, was outlined in a letter smuggled from prison and released to The Irish Times.

In a Dáil debate yesterday, Mr Flanagan said he was aware what the 19-year-old from Firhouse in Dublin was considering. “I advised against this course of action saying it was unlikely to serve any positive purpose in his trial and would, obviously, be detrimental to his health,” he said.

“This view is shared by Ibrahim’s lawyer who has given him similar advice. I am asking Ibrahim to maintain his health by taking food.” Sinn Féin deputy leader Mary Lou McDonald claimed the Government’s approach to securing Mr Halawa’s release was “at best tepid”.

Mr Kenny told reporters yesterday the Government was “very conscious” of Mr Halawa’s case but “we are also conscious . . . whether I like or whether I don’t, it is the legal system of Egypt which applies here and I would be very careful not to say anything or to do anything that would make the situation worse”. He said he hoped the hunger strike would “end quickly”.

Fianna Fáil Senator Mark Daly, who sits on the Oireachtas Committee on Foreign Affairs, said its members had proposed to the department on Wednesday that a delegation travel to Egypt to meet Mr Halawa to coincide with his next court date in August. Mr Halawa and about 420 co-defendants are due to have their case heard, although his family anticipate further delays. He was detained at the Fatah mosque in Cairo in August 2013.

Mr Flanagan said the Government was “maintaining extensive contact” with Egyptian authorities and Mr Halawa had been visited 41 times by officials.