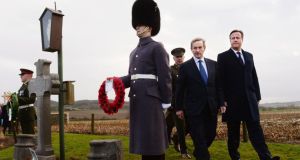 A downpour at dawn cleared as Taoiseach Enda Kenny and British prime minister David Cameron paid a solemn visit to the sparse, bloodied Flanders landscape to pay their respects to the dead of the first World War.

The morning began at Messines, where then President Mary McAleese and Queen Elizabeth opened the Island of Ireland Peace Park 15 years ago.

This was the first joint visit by a Taoiseach and prime minister to honour the Irish and the British who fell, and an occasion to reflect on the “fortune of war”, as one memorial puts it.

‘Senseless slaughter’
“It’s very striking to stand there and look at the names of your own countrymen, people who fought in what was supposed to be the war to end all wars and the senseless slaughter that occurred, and to visit the graveyards, and to see the names and times and so on is very poignant I have to say,” Mr Kenny said afterwards.

The Messines peace tower, modelled on an Irish round tower, is a distinct landmark in the flat Belgian countryside, the scene of incalculable human devastation almost a century ago. Mr Kenny and Mr Cameron were greeted there in the cold by local mayor Sandy Evrard and Koen Verlaeckt, secretary general of the Flemish international affairs department.

In the presence of Defence Forces ceremonial officers and Royal Grenadiers, the two leaders laid wreaths. “In omós do na Gaeil ar fad a fuair bás. In honour of all Irish who died,” said the Taoiseach’s inscription.

Afterwards, the Taoiseach and the prime minister travelled by car together to visit the solitary grave at Locre of Maj Willie Redmond, MP in the Irish Parliamentary Party who was killed in action in June, 1917.

He was the brother of John Redmond, leader of the party. The Clare byelection after his death was won by Éamon de Valera.

Mr Kenny later said the experience of standing at the graveside brought home to him the benefit of the EU. “It was . . . a great privilege to have been able to lay a wreath on behalf of the Irish people at the grave of Willie Redmond.”

In his inscription in the visitors’ book, Mr Kenny said he was there to honour a soldier “who lived and died for his beliefs” and “whose faith in the power of unity still resonates powerfully”.

Mr Cameron wrote that it was an “honour to visit with the Irish PM to commemorate all those who gave their lives in the cause of freedom”.

The two leaders went together then to the village of Wytschaete, scene of the fateful joint advance on Messines Ridge by the 16th (Dublin) and 36th (Ulster) divisions. They went on to Menin Gate Memorial at Ypres, dedicated to 100,000 British and Commonwealth soldiers whose graves are unknown. There they were joined by Belgian prime minister Elio di Rupo and the Flemish minister-president Kris Peeters.

‘Sacred place’
In 1919, Winston Churchill said of Ypres that a “more sacred place for the British race does not exist in the world”. No less than 54,000 names are chiselled into the memorial. Mr Kenny heard of three McDonnell brothers commemorated at Menin Gate and of a 16-year-old called Burlace who is remembered alongside his fallen father. Mr Cameron had a personal connection to the event. He told yesterday how the name of his great great uncle, Capt John Geddes, is recorded at Menin Gate. During the ceremony he stepped forward to declaim from Laurence Binyon’s ode in his poem For the Fallen:

They shall grow not old, as we that are left grow old:
Age shall not weary them, nor the years condemn.
At the going down of the sun and in the morning,
We will remember them.