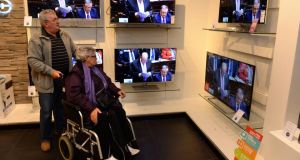 The Coalition’s fourth budget is a clear sign that the corner has been turned in the economic cycle but the question in the political world is whether it will also mark a turning point in the fortunes of the Government parties.

The concessions in tax and welfare announced by Michael Noonan and Brendan Howlin should benefit almost every family in the country, even when the introduction of water charges is taken into account.

Whether the majority of voters will see it like that is a different matter. “It won’t save you,” Socialist TD Joe Higgins shouted across the Dáil chamber as Noonan announced householders would be able to claim tax relief on their water charges.

Going on the results of last week’s byelections, Higgins may be right. But with a year or more to go to the general election, the battle will now begin in earnest about the future direction of the country.

Noonan staked out the ground for Fine Gael at the end of his Budget speech stressing that the country had travelled a long and difficult road and now faced a choice. “Do we return to the past, unwind the progress and structural reforms made, and pursue boom-and-bust policies?” he asked.

The Minister answered his own question by stressing the Government parties would follow a road “whose milestones are prudence and caution”.

The implication was that the Opposition parties and Independents would gaily lead the country back down the road to profligacy and disaster.

Earlier in his speech, though, he acknowledged that many people have not yet experienced the fruits of the recovery and he made no bones about the fact Budget 2015 is designed to address this problem.

While some economic commentators have faulted the Government for taking the foot off the pedal of prudence a little too quickly, a modest expansionary budget was a political imperative if Fine Gael and Labour are to have any chance of retaining power in the next election.

TDs from both Coalition parties were left reeling by the shocking outcomes of last week’s byelections, coming on the heels of their poor performance in the local and European elections in May.

They were bitterly disappointed the strength of the economic recovery had generated no political dividend but they dared to hope yesterday that the mildly benign nature of the Budget – which put a little extra money in the pockets of most voters – would improve the political atmosphere. Government TDs will need to work hard to sell the Budget to voters as tangible proof that the benefits of recovery are now beginning to be spread around.

The adjustments to the Universal Social Charge (USC), the tax bands and the top rate of tax were designed to ensure all workers got some kind of benefit particularly those paying the marginal rate on relatively low incomes.

The introduction of two new higher rates of USC was a clever move to ensure those on higher incomes would not receive a cash benefit which would dwarf that being given to those on lower pay.

The increase in child benefit and the restoration of some form of Christmas bonus on welfare payments were also carefully calibrated to ensure the benefit of the Budget would be felt right across society.

The positive reaction of TDs in both Coalition parties was a reflection of the politically nuanced nature of the Budget as a whole. In other years, Fine Gael and Labour TDs struggled to reconcile themselves with aspects of the budget they found utterly unpalatable but this year there was no difference in the response of both parties.

The new high rates of USC may have raised a few eyebrows on the Fine Gael side of the Coalition but the abolition of the pension levy on private-sector workers more than compensated with the party’s core constituency.

On the Labour side, TDs were happy to point to the Christmas bonus and child benefit increase, although some remarked ruefully on the political skill or luck that enabled Joan Burton to restore the child benefit that had been cut when Eamon Gilmore was leader.

All of the positives in the Budget could, however, be set at naught unless the Coalition gets its story clear on water charges. The public is confused and frightened about what the charges are likely to be and willing to listen to all sorts of scare stories about massive bills.

The way in which Irish Water was established, with high salaries and bonuses for the bureaucratic top brass in the company, has really annoyed the public who will have to pay the charges. It has made the acceptance of the need to pay for something that was free for most people until now more difficult to accept.

A fundamental problem is that paying for water offends something deep in the Irish psyche. Living in a country where it rains so much, people find it hard to accept the notion of paying for water. Of course what they will actually be paying for is its treatment and distribution but that is not easy to explain.

The potential political damage from the water charges could be out of all proportion to the actual amount of revenue raised, so the Government has a big job to do to persuade people that the charge will not be too onerous.