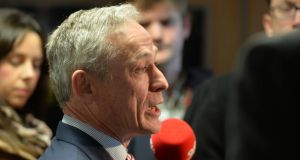 Minister for Jobs Richard Bruton: “The purpose of this process is to analyse the links in the chain and why are those links putting us out on a limb in terms of Ireland’s performance relative to the rest in the pack, and to identify the piece in the chain that’s letting us down and correct it.” Photograph: Alan Betson

The Government will push this year to boost its World Bank business rankings in key areas in which Ireland ranks badly, Minister for Jobs Richard Bruton has said.

Although Ireland is 15th overall in the bank’s “Doing Business” league table of 189 global economies, there is concern in Government circles at a number of poor sectoral ratings.

Solid ratings
Such rankings are at odds with solid ratings in other areas such as protecting investors (6th); paying taxes (6th); resolving insolvency (8th); and starting a business (12th).

“We plan to set up an initiative with the Taoiseach that would drive some of the areas where we’re weak,” Mr Bruton said in an interview.

“There’s areas where we oughtn’t to be weak. They probably fall between a number of stools so we want to bring a concerted approach across whoever is responsible and get an action through on this.”

Asked what specific targets would be set, the Minister said it was still too early to say exactly. “The purpose of this process is to analyse the links in the chain and why are those links putting us out on a limb in terms of Ireland’s performance relative to the rest in the pack, and to identify the piece in the chain that’s letting us down and correct it,” he said.

On the poor rating for electricity connections, Mr Bruton suggested there were problems in the interplay between separate public bodies.

Weakest links
There were links in the chain where “where the cogs don’t seem to kick in”, he added.

The highest-ranked country on the World Bank list is Singapore, followed by Hong Kong, New Zealand, the US and Denmark.

Inward investment
The Government believes higher sectoral rankings would, in turn, help advance Ireland’s overall ranking. This is perceived to be important in drumming up inward investment. The initiative forms part of the Government’s jobs plan. “Every quarter, peoples’ toes are being held to the fire to see are you making progress. It has forced much quicker change in legislation,” Mr Bruton said.