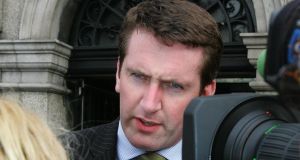 Aodhán Ó Ríordáin is to examine the possible decriminalisation of cannabis in his new role as Minister of State with Responsibility for the Drug Strategy. Photograph: David Sleator

Aodhán Ó Ríordáin is to examine the possible decriminalisation of cannabis in his new role as Minister of State with Responsibility for the Drug Strategy.

The Labour TD’s new position was confirmed in the Dáil on Thursday by Tanaiste Joan Burton.

He said his first task will be to examine the National Drugs Strategy which expires next year.

Mr Ó Ríordáin said he is willing to examine to the potential relaxation of the laws.

He said: “I believe someone who has an addiction issue should be dealt with through the health system and not the criminal justice system.

“I think people – guards, the prison service – will probably agree with me on that. We have an opportunity through the legislation that is forthcoming the Misuse of Drugs Act to investigate that.

“I am going to mark any hard calls on that but the difference between decriminalisation and legalisation is quite different.

“We need to have a proper discussion before we set up alarm bells in people’s heads.”

Mr Ó Ríordáin said he had tried drugs once in Amsterdam as a student but had not taken any illegal drugs.

He said: “I have seen the effects of drugs in my teaching life and in my community activism as it were as a public representative.

“When you see what drugs does, it has stolen generations and you see the effect it has on children.

“It passes on dysfunction and it passes on a huge amount of problems that children have for the rest of their lives.

“My own personal decision never to have taken illegal drugs was fuelled by my experiences in the classroom.”