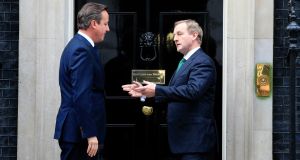 The Government does not support the United Kingdom’s continued membership of the European Union “at any cost”, Minister for European Affairs Dara Murphy has said.

Meanwhile, in a sign of growing concern within Government about a British referendum on whether or not to remain in the EU, Mr Murphy also said officials were working on contingency plans for “various potential outcomes”.

His comments are the strongest indication yet of Dublin’s core position in advance of a summit on British demands for EU reforms.

As preparations intensify in advance of the key European summit next month, where leaders hope to sign off on a reform package sought by British prime minister David Cameron, Mr Murphy said Ireland supported many of the arguments made by London on issues such as competitiveness and economic governance.

However, he said some British demands concerning welfare and immigration were “tricky” and had attracted “widespread opposition” from member states.

The most contentious demand is for a requirement that workers from other EU countries should wait four years after moving to Britain before they can claim benefits, although London has indicated it would be willing to consider alternative proposals as long as they helped to deter migrants.

“While we do support the United Kingdom’s membership of the European Union, we do not support it at any cost,” Mr Murphy said.

“That applies to work benefits, social protection benefits, employment and everything else. They are core, core principles,” he added.

Asked during a meeting of the Oireachtas EU Affairs committee about the Government’s “Plan B” in the event the UK voted to leave the EU - or Brexit - Mr Murphy said there was “ongoing work” by officials in the Department of the Taoiseach, “looking at various potential outcomes”.

However, he said the focus was on finding a deal that could meet Mr Cameron’s ambitions while not putting Irish citizens at a disadvantage or undermining the EU’s principles.

Asked about Mr Murphy’s comments,Government sources were anxious to focus on what Ireland and the UK had in common rather than any differences.

“We are focused on supporting the UK’s ongoing membership of the EU,” a spokesman said.

He told a London audience last month it was in Britain’s interest to remain in the EU but stressed the decision was a matter for the British people.

European Council president Donald Tusk has said he will present “concrete proposals” to address Mr Cameron’s demands ahead of the summit in mid-February.

A deal next month could pave the way for a British referendum on its continued EU membership as early as June.

Employers’ group Ibec, meanwhile, says it has received assurances from British ambassador Dominick Chilcott that Britain would not seek to scrap or modify aspects of EU employment legislation which would be detrimental to Ireland’s interests.

Ibec chief executive Danny McCoy held a meeting with Mr Chilcott and Mr Murphy amid growing concern within the Irish business community here about how far the Irish Government is willing to go to keep Britain within the EU.

“There could be a stay risk as well as a leave risk if they get too favourable a deal,” he said.