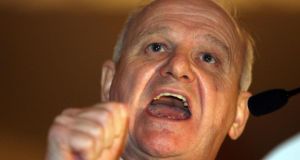 The DUP’s William McCrea, who has lost his South Antrim seat to the UUP’s Danny Kinahan in a major upset. Photograph: Paul Faith/PA

The UUP is back on the green benches of Westminster after the Northern Ireland election. It was neck and neck throughout the count but in the end the UUP won the South Antrim seat held by the DUP for the last decade.

Danny Kinahan’s victory for the party in the constituency over William McCrea is one of the big upsets of the general election in Northern Ireland. He took 11,942 votes to McCrea’s 10,993.

During campaigning, Mr McCrea said Mr Kinahan could “dream on”, but the former British soldier and ex-Christie’s auctioneer took the seat by 949 votes.

Mr Kinahan’s strong performance at the Assembly and liberal stance on same-sex marriage seem to have helped secure the victory.

Throughout the election campaign, South Antrim was mooted as a constituency where a DUP incumbent could be edged out.

Danny Kinahan said he was “ecstatic” to be elected as an MP and praised Mr McCrea for the work he had done in South Antrim. UUP leader Mike Nesbitt told The Irish Times that he felt “fantastic”.

“I am really pleased for Danny and very grateful to the voters,” he said.

“He will work for all the people, whether they voted for him, somebody else or didn’t vote at all.

“He is a great guy. It is great for Danny and the association in South Antrim and the party.

“We came into this with momentum from last year and belief we could get back on the green benches.”

Mr McCrea said it had been “an honour and privilege to serve the people of South Antrim over the last decade” and congratulated Danny Kinahan.

“I do believe South Antrim will go from strength to strength,” he said. “I hand the mantel over to Danny.”

Mr McCrea also said that he leaves the constituency with “dignity, integrity and great pride”.

Dissident republican has sentenced increased for murder bid 16:29
Ireland and UK determined to ‘reboot’ relationship in wake of Brexit, says Taoiseach 16:25
Funeral of late Bishop told of ‘a kind and good and courageous man’ 16:13
Employees to have legal right to request home working, says Varadkar 15:31
‘They deserved much better’: Church of Ireland apologises after mother and baby report 15:08