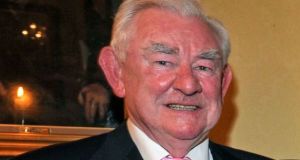 Seán Donlon says SF has a ‘strong mandate and they can afford to be both brave and generous.’ File photograph: Dave Meehan

A former senior Irish diplomat has urged Gerry Adams and Sinn Féin to end its House of Commons abstentionist policy and to ensure that the Northern Executive and Assembly are speedily reinstated.

Seán Donlon praised Mr Adams’s recent comments where he said nationalists must adopt a new approach in dealing with unionists.

Mr Donlon quoted a recent speech of the Sinn Féin president’s where he said, “We need a new approach, one which unlocks unionist opposition to a new Ireland by reminding them of their historic place here and of the positive contribution they have made to society on this island.”

Mr Donlon, a former ambassador to the United States and former secretary general of the Department of Foreign Affairs, played a pivotal role in negotiating the 1985 Anglo-Irish Agreement. He said Sinn Féin’s refusal to take its seven seats at Westminster was based on “impenetrably obscurantist and unintelligible” arguments.

Mr Donlon said that Sinn Féin has a “strong mandate and they can afford to be both brave and generous”. He said the party’s refusal to take its seats was based on an “obscure philosophical objection”.

“This is their moment and I hope they use it,” he said.

Mr Donlon referred to how former SDLP leader, the late Gerry Fitt, succeeded as MP for West Belfast in “getting Northern Ireland back on the Westminster agenda” and of the role of former SDLP deputy first minister Seamus Mallon in advocating the interests of nationalists.

He added that abstentionism was not serving the interests of Northern Ireland and was “doing nothing to unlock unionist” opposition to a united Ireland. “Take your seats at Westminster,” Mr Donlon urged Sinn Féin.

He also said the party should tone down its commemoration of dead IRA members, repeating that such displays did not assist in unlocking unionist opposition to a united Ireland.

“Not all of us want to be reminded of the atrocities of 30 years of troubles. And if that is our view as nationalists how do you think unionists and other victims of the Troubles must feel when they see these commemorations and hear senior Sinn Féin people speak as they speak,” he said.

Mr Donlon also was critical of Sinn Féin TD Mary Lou McDonald, describing the current period as the “endgame” for partition. “Does she ever stop to think about unionist consent?” he asked.

“Harping on about the end of partition without any reference to consent...does not help to unlock unionists,” he said.

Mr Donlon also referred to the notion of unification “happening by numbers” which he said was “neither desirable nor is it achievable”.

“There is no attraction and no prospect, Brexit or otherwise, of unity without consent. Numbers ultimately will not decide the issue.”

Mr Donlon further called on Sinn Féin not to “weaponise” the Irish language. He said brought up in an Irish speaking household he shared the party’s commitment to Irish but added that “compulsion and legislation was not a total success in our jurisdiction.

“In the Northern Ireland context nothing is more important than the healing of the divisions. That is something that cannot happen without Sinn Féin taking a huge jump and putting flesh on Gerry Adams’s fine words. Sinn Féin is needed at Westminster and is needed in a devolved government in Northern Ireland. The time is now.”

Pat Cox, the former president of the European Parliament, in opposing Brexit said he didn’t want to “bet his grandchildren’s future on Little Englander identity politics”.

Mr Cox said he never believed that “participating in the European process you had to be less Irish” but that he “always believed it made us more effective as Irish”.