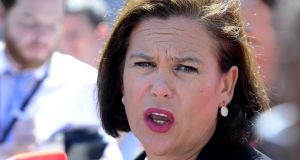 Mary Lou McDonald: study found that Sinn Féin focused on the topic of ‘change’ in its Facebook posts over the course of the election campaign. Photograph: Cyril Byrne

Sinn Féin had around 10 times more engagement on Facebook during this year’s general election campaign than the State’s other political parties, a study has found.

Their study found that Sinn Féin posts on Facebook over the course of the campaign (January 14th to February 8th) had 567,020 “interactions” or responses, compared to 49,358 for Fianna Fáil and 55,152 for Fine Gael.

Across the board the top 15 posts in terms of interactions were all by Sinn Féin, with its top post receiving 13,742 interactions. The Fine Gael post with the highest level of engagement had 5,013 interactions, putting it in 16th place the study shows.

The results of the study are outlined in Media and the election: social and traditional media narratives in the campaign, a chapter by Park and Suiter in a forthcoming book on the general election, How Ireland Voted 2020.

Dr Park is a postdoctoral researcher at the Institute for Future Media and Journalism, at Dublin City University, where Dr Suiter is associate professor at the School of Communications.

The study found that Sinn Féin focused on the topic of ‘change’ in its Facebook posts over the course of the election campaign, with more than one in five of its posts referring to the concept. It accounted for two-thirds of all mentions of ‘change’ by all political parties on Facebook during the campaign.

The study, which used the Newswhip API social analytics service, also found a marked difference between the emoji icons used to react to posts by the parties.

The study concluded that Sinn Féin ran a successful social media campaign and set a strong narrative as the party that represented change, and that the support it received from voters under the age of 35 may be related to this.

Data collected on Twitter use during the last week of the campaign also found a much greater level of activity on the accounts of Sinn Féin politicians. While the absolute number of tweets were relatively small for all politicians, Sinn Féin’s tweeted the most and were met with more retweets and likes.

This underlined the number of Sinn Féin supporters on Twitter, “often referred to somewhat disparagingly as ’Shinnerbots’ given their proclivity to be quick to denounce and attack any post not to their liking”, the authors said.

Sinn Féin’s success on social media fitted with international evidence where, on average, social media users are younger and pay more attention to politics than those who do not use social media.

“Sinn Féin set a populist, anti-establishment agenda as being a party of change, through their interactions with mainstream media and their social presence, as well as through participating in a voting strategy with left-leaning parties,” said Suiter and Park, who added that the reaction of the mainstream media to Sinn Féin, perhaps inadvertently, served to reinforce the party’s messaging.