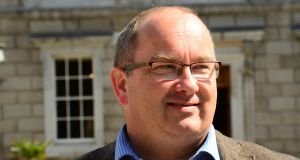 Green Party candidate Grace O’Sullivan is expected to be elected to the Agriculture panel of the Seanad.

The Waterford-based former Irish surfing champion was a candidate in both the 2014 European Parliament elections and the recent general election.

Sinn Féin topped the Seanad poll on the Agriculture panel, with the party’s Mayo councillor Rose Conway-Walsh elected on the first count.

This follows the poll topping performance of Sinn Féin councillor Fintan Warfield, who was elected on the first count to the Cultural and Educational panel.

Mr Boyhan is thought to be the first Independent Senator in the Seanad’s history to be elected to the vocational panel following a general election.

Outgoing cathaoirleach of the Seanad Paddy Burke was re-elected, as was Fianna Fáil Senator Denis O’Donovan, who retained his seat on the Agriculture panel.

The Agriculture panel has proved a disappointment for Fine Gael.

Former Kildare North Fine Gael TD Anthony Lawlor, who lost his Dáil seat in the general election, was unsuccessful in his attempt to be elected to the panel, as was his party colleague and former Tipperary TD Noel Coonan.

Former Fine Gael TDs Kieran O’Donnell and Gabrielle McFadden, who lost their Dáil seats in the general election, were also elected on Tuesday morning to the Cultural and Educational panel of the Seanad.

In the Seanad vocational panel counts, the votes are multiplied by 1,000 to simplify the counting and avoid having to count fractions of votes because of the small electorate of 1,155.

Those entitled to vote on the vocational panels are the 158 new TDs, 53 of the 60 outgoing Senators (as seven were elected to the Dáil in the recent election) and 941 city and county councillors.

Each member of the electorate has a vote on each of the five vocational panels to elect 43 senators.

Thirteen former TDs who lost their Dáil seats in the general election are contesting the five panels.