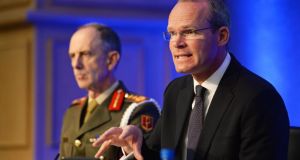 Minister for Defence Simon Coveney has said Ireland has under-invested in the defence sector and the situation needs to be corrected.

Mr Coveney said he would make a strong argument for his Department at budget time when he launched the White Paper outlining defence policy over the next 10 years.

“I make no bones about it. I think Ireland has under-invested in defence and I think we need to correct that. But that is not going to happen overnight,” he said.

However, Mr Coveney revealed the Government would put “a lot of financial support” behind a new peace and conflict resolution institute at the Defence Forces training centre in the Curragh. The project, proposed in the 2015 White Paper, is to be known as the Institute for Peace Support and Leadership Training.

“This is a really exciting initiative that we are going to put a lot of financial support behind,” Mr Coveney said. He described it as a large and ambitious project people could be proud of “in time”.

The Government has authorised an evaluation of the concept, according to the White Paper, and work on the project will be showcased as part of the 2016 commemorations.

“There are unfortunately a minority of people in Ireland who are growing up in households that, for whatever reason, are likely to result in a new generation of social disadvantage because of failures of the State or other failures in their lives.”

“There is an opportunity for the Defence Forces to put a structure in place that can help turn those lives around in terms of ambition, self-esteem, confidence and a vision for the future.”

The White Paper confirmed the Government is committed to maintaining the permanent Defence Force personnel at a level of 9,500, which Mr Coveney described as a “benchmark minimum”.

He said the figure was somewhat below that at the moment, but a “very active” recruitment campaign would get the numbers up to 9,500.

Turning to the Reserve Defence Force, he said he was very conscious of the fact the recruitment campaign under way “had not been as successful as we would’ve liked”.

Mr Coveney said: “I also think that some people may have taken the view that joining the reserve was essentially like joining a GAA club that was permanently training but never playing a match.”

The Minister said “niche” roles reservists could play were being examined. “This includes a proposal that where specialist skills gaps within the permanent Defence Forces are there, we will consider engaging reservists for those.”

Prospective personnel should be head-hunted from areas such as IT and medicine, he added.

Mr Coveney said the LÉs Eithne, Ciara and Orla were “at or coming to the end of their recommended life” and would need to be replaced.

Fianna Fáil defence spokesman Seán Ó Fearghaíl said he was disappointed Mr Coveney was “seemingly unwilling to raise the manpower of the Defence Forces to the much-needed 10,500 mark”. He expressed concern over what he described as “the failure to commit to the re-establishment of a three-brigade structure for the Army”.