Sharp divisions between Coalition parties on dissent over axing of Seanad 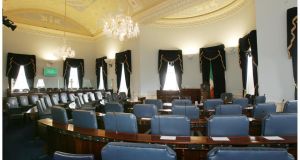 The Seanad Chamber: A succession of Labour Senators and TDs declared yesterday that they will vote No on polling day. Photograph: Alan Betson/The Irish Times

Fine Gael and Labour have diverged sharply in their attitude to dissent within the Government over the referendum to scrap the Seanad.

Although Taoiseach Enda Kenny insisted both parties must throw their weight behind the campaign, Labour adopted a relaxed stance as a line of TDs and Senators said they would vote to retain the House.

“It’s established party policy and we expect that members will support party policy but we’re not planning to go to war about this,” said the spokesman for Tánaiste Eamon Gilmore.

The remarks came one day after Mr Gilmore said he expected each of his public representatives to back abolition in the referendum campaign.

A succession of Labour Senators and TDs declared yesterday that they would vote No, saying they favoured reform, but only one Labour figure reserved his position in respect of the referendum Bill.

Once TDs and Senators observe the whip on the Bill, Labour sources say only those who make a “song and dance” about their defiance of the party’s stance in the campaign are likely to be tackled.

Within Fine Gael, certain TDs expressed concern in private about the ambivalence within Labour and noted that the referendum campaign was already likely to prove difficult without Opposition support. Although Fine Gael Senator Pat O’Neill said he backed the Bill, he declined to say how he would vote on polling day.

The Labour politicians who will vote against abolition include its chief whip in the Dáil Emmet Stagg, Cork South-West TD Michael McCarthy and Dublin Mid-West TD Joanna Tuffy.

Seanad whip Aideen Heyden and Senators John Kelly, John Whelan, Susan O’Keeffe and Jimmy Harte each said they would vote to retain the House. All, however, said they would support the referendum Bill.

As whip, Mr Stagg said it remained his job to ensure Labour TDs supported the legislation. “I’m absolutely confident that they will,” said Mr Stagg, who said he would not be campaigning in the referendum.

Of the Labour figures reached yesterday, only Senator Denis Landy withheld his position on the Bill. “I’m considering the whole situation, speaking to constituents and the party organisation.”

Vote to abolish
Dublin South East TD Kevin Humphreys said he was leaning towards a vote to abolish the house on polling day.

“I’m not firm yet on that. It’s not one that has been to the forefront of my mind in the last two years,” Mr Humphreys said .

By contrast, Ms Tuffy said she would campaign vigorously for a No vote .

Such remarks are at odds with Mr Gilmore. “We expect our public representatives to support the proposition in the campaign,” he said on Wednesday. Mr Kelly rejected Mr Kenny’s argument that the Seanad never shouted stop to the excesses of the Celtic Tiger.

“Let him not be blaming us for what happened during his time in opposition,” he said.

Similarly, Mr Whelan took issue with what he described as the “scapegoating” of the Seanad by the Taoiseach.

“There are others who have to answer that charge before it comes to the Seanad.”

Ms O’Keeffe said she would support the Bill. “I will be voting No in the referendum. I have said long and fast: ‘retain it and reform it’.”

Opposes abolition
As whip, Ms Heyden said she would support passage of the legislation but opposed abolition. “I will be voting No. I’m against the abolition of the Seanad. “Personally, I believe there needs to be a significant reform of the Seanad.”

Mr Harte said he too would support the legislation but would vote to retain the house. He too favours reform.