Seven deputies who might run for leader of Labour Party

It is the ordinary members of the 4,000-strong party and not parliamentarians who will choose new leader 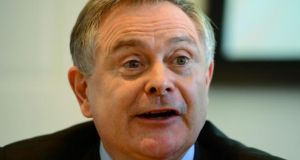 Minister for Public Expenditure and Reform Brendan Howlin ran twice for the leadership previously but was defeated by Ruairí Quinn and by Pat Rabbitte. Photograph: Frank Miller

The Labour Party was an early adopter of the one-member one-vote system and it is the ordinary members of the party, not its parliamentarians, who will choose the new leader.

In the past, especially in the contest for deputy leader, the membership has backed candidates who would not have had commensurate support from TDs and Senators.

The most recent and striking example was Joan Burton, who defeated Jan O’Sullivan by 1,480 votes to 1,276 in the contest for deputy leader in 2007.

Burton would not win a vote of the parliamentary party but is very popular with the grass roots in the 4,000-strong party.

On that basis, she has been installed as the early favourite.

A debate is beginning as to whether the new leader should be an experienced politician or one of a new generation who will compensate for a lack of experience with a promise of energy and new ideas.

There is general agreement that the new leader must have a clear and consistent message and a plan to recover lost ground for the party within a timeframe of between a year and 18 months.

At least seven of its TDs have so far either expressed an interest or have been mentioned as possible candidates.

Joan Burton The party’s deputy leader is highly experienced and is popular with the grass roots because of the contrarian position she often adopted when the troika was involved with overseeing the bailout programme.

She is outspoken and has had differences with ministerial colleagues, particularly Gilmore but also Brendan Howlin in his Public Expenditure role.

She has run a highly efficient operation within the Department of Social Protection, particularly on the communications side. One factor that might go against her is her age.

She will be 67 by the time of the general election, although she has shown no signs of losing any appetite for the fray.

Brendan Howlin Another vastly experienced politician, Howlin has been a minister for health and for environment in the past, and now has the key Labour finance portfolio of Public Expenditure.

Howlin was the key negotiator for his party when the programme for government was brokered and has run his department – which is essentially responsible for all public spending – with a rigour that surprised some of his colleagues.

Howlin ran twice for the leadership previously but was defeated by Ruairí Quinn and by Pat Rabbitte.

Now in his late 50s, he would command respect if not devotion from the parliamentary party.

Howlin’s style of communication – unintentionally slightly pompous – may reduce his appeal with the membership. Alex White White would bring both life experience and a bit of new energy to the contest. Now in his 50s, he was a late convert to representational politics, having become a TD in 2011.

He replaced Róisín Shortall as Minister of State for Health in 2012 and has impressed, although he has taken at least a portion of the blame for the fiasco over discretionary medical cards.

He made the breakthrough in the very middle class Dublin South but constituency changes may put his seat in jeopardy.

He could be in with an outside chance as he might prove popular with younger members.

Seán Sherlock Youthful-looking but now in his early 40s, Sherlock was one of only three new TDs elected in 2007 when Rabbitte was leader.

He impressed very quickly with his coolness and confidence and was rewarded with a Minister of State job in 2011.

He has an earnestness about him that verges on the boy scout and his political role in recent years has largely focused on his ministerial job in technology.

While he has good ideas and is a good communicator, some feel he has not put himself about enough and speaking out on areas and issues that are outside his responsibilities.

Alan Kelly Kelly arrived out of nowhere to win a seat for the party in the 2009 European parliament elections.

He was elected to the Dáil in 2011 and became Minster of State in Transport.

He has a robust style and is an independent operator with strong individual messages – not least his opposition to fee-paying schools.

As a Minister he has been very active, coming up with bike schemes for Galway and Cork.

Arthur Spring The Kerry North TD has become increasingly impressive and authoritative in the past year, although some colleagues sense that he can be a little naive at times.

That said, he is a very solid performer and has a bearing that is sometimes reminiscent of his uncle, Dick, who became leader of the party at 33, a few years younger than Arthur is now.

He is a former banker who has pushed a message for reorganisation, refocus and new priorities for quite some time now.

Dominic Hannigan The Meath East TD is a very assiduous operator who worked very hard to win his Dáil seat.

He is seen as an effective backbench TD but his profile has not been as high that of as some of his younger colleagues.