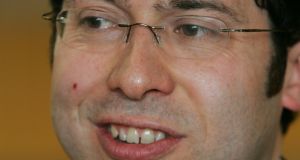 Mr Mullen made the claims alongside Independent TDs Mattie McGrath and Michael Healy-Rae, as well as Independent Senator Fidelma Healy-Eames at a press conference yesterday.

Senator David Norris, who stood to the side as the group gave its briefing on the plinth, later rejected their claims as red herrings.

“Is such massive bankrolling of social change in Ireland up to and including securing a particular result in a referendum wrong? It absolutely is.”

He also said Mr Feeney’s organisation had given €7 million to Tusla, the Child and Family Agency, which reduced its funding to Catholic support agency Accord. Tusla has rejected claims the cuts were because of the church’s opposition to the same-sex marriage referendum.

Mr Mullen said Tusla chairwoman Norah Gibbons had expressed her support for a Yes vote. He said: “We want to know whether all of these issues are connected. We are concerned Atlantic Philanthropies is unduly influencing Irish government policy.”

However, Mr Norris dismissed the claims as another “red herring fleet”. He said: “As Irish people we should be down on our knees thanking Chuck Feeney. He has given huge amounts of money to Trinity, to UCD.”

Brian Sheehan, co-director of Yes Equality, an umbrella group which includes some of the organisations criticised by Mr Mullen, said: “Atlantic Philanthropies are not funding the Yes Equality referendum campaign. “Yes Equality is fully funded through its supporters organising fundraising initiatives throughout Ireland. All elements... are appropriately registered with the Standards in Public Office Commission.”

In a statement, Tusla said Ms Gibbons’ Twitter account is personal and “and is described as such”.

“With regard to funding received from Atlantic Philanthropies, Tusla welcomes the capacity which this support provides to the Child and Family Agency . . . This money has been received . . . without conditions other than those normally associated with good governance.”

Meanwhile, during the day, Senator Norris refused to remove his Yes badge in Leinster House. Mr Norris was asked by the Superintendent of the House to take the emblem off, but the Senator refused. Fine Gael TD Jerry Buttimer is also refusing to take off his emblem.