SDLP’s Margaret Ritchie hard to dislodge in South Down 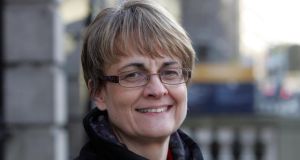 Margaret Ritchie: Unionist support and determination to retain South Down should ensure she is returned. Photograph: Eric Luke/The Irish Times

The SDLP has laid limpet-like claim to South Down since Eddie McGrady first won the seat for the party in 1987. That’s because the seat was so hard-won in the first place. Now Sinn Féin believes it time for another change.

McGrady had to battle unsuccessfully through three previous general elections in 1979, 1983 and 1986 before he finally dislodged Enoch Powell, the former Tory who had been inveigled over to South Down at the invitation of the then Ulster Unionist Party leader, James Molyneaux.

McGrady, Molyneaux and Powell have gone to their eternal reward, their political struggles over, and South Down is now in the hands of the SDLP’s outgoing MP Margaret Ritchie. McGrady was her great friend and mentor. In election after election from 1987, McGrady, with Ritchie as his chief lieutenant, consolidated the constituency as a firmly nationalist seat.

After McGrady stepped down she won the seat in the last general election against the main challenge of Sinn Féin’s Caitriona Ruane with an impressive majority of more than 8,000 votes.

But Ritchie knows full well that with Sinn Féin at your heels you can never rest easy, even if sitting on such a sizeable majority.

Sinn Féin’s Gerry Adams and Martin McGuinness have decided to try fresh blood this time in 30-year-old Chris Hazzard who was co-opted on to the Assembly after the hierarchy decided that Willie Clarke would step aside to “concentrate on council work”.

“For 28 years, nearly as long as I’ve been alive, the SDLP has held the South Down seat,” says Hazzard. “What we are seeing now is people saying that maybe it’s time for a change; that is starting to resonate.” 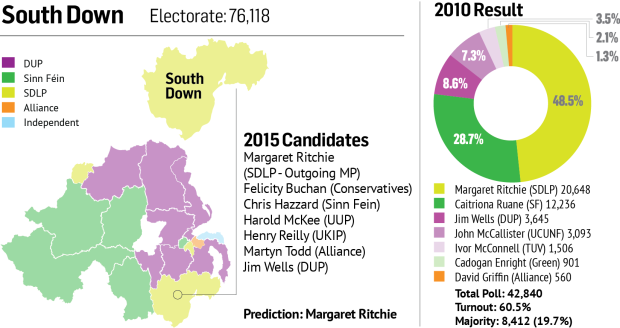 Ritchie is highly critical of Sinn Féin’s refusal to sit in the House of Commons, arguing that real business is done there on “the economy, creating jobs, opposing austerity and supporting our farmers and fishermen”.

And she adds witheringly, “a lot of voters may not realise this but Sinn Féin do go to Westminster. They go there to collect their expenses and attend the wine receptions. In fact, they enjoy most of the trappings of being an MP other than actually taking their seats, representing their constituents and opposing Tory cuts. Sinn Féin will again be making a lot of noise on the sidelines rather than getting involved on the pitch.”

The jousting will continue to May 7th polling day.

Henry Reilly, a local councillor, will be expecting a decent vote for Ukip, while sitting DUP MLA Jim Wells and Harold McKee of the Ulster Unionists, should do well – but not too well. Martyn Todd will try to get the Alliance vote over the 1,000 mark, while it is anybody’s guess how Conservative candidate Felicity Buchan from Aberdeenshire fares in South Down.

The advantage seems to be with Ritchie, although she has experienced some political turbulence since she was elected MP in 2010. She took over as party leader in 2010 from Mark Durkan, but after the SDLP dropped its representation from 16 to 14 Assembly seats in 2011 she lost out to current leader Dr Alasdair McDonnell.

Her position was further undermined by unflattering remarks former Belfast US consul general Kamala Lakhdhir said about her in information that emerged through Wikileaks. Ms Lakhdhir wrote in a “confidential” dispatch that Ritchie appeared “wooden”, “stilted” and burdened with “an unpleasant public speaking voice” and that she did not have the “rhetorical skills” of her predecessor Mark Durkan.

It must have been hurtful. Yet, Ritchie, while taking a hurried lunchtime break from canvassing, insists her confidence wasn’t undermined by the loss of leadership or by the undiplomatic criticism. “I thought her comments were totally out of place and totally inappropriate. But I am resilient; I did not let them faze me,” she says.

She must also take heart from the fact that unionists in their thousands voted for McGrady and subsequently for her in South Down Westminster elections. That was after it became a safe SDLP seat. That wasn’t because of particular great unionist love for either McGrady or Ritchie. Rather, it was local unionists saying if one of theirs couldn’t win South Down they’d be damned if they let a Sinn Féiner take it.

This isn’t simply anecdotal; it is evident from the voting patterns.

But in the 2010 general election the votes of these candidates dropped significantly, Wells’ to 3,645 votes, McCallister’s to 3,093 votes. Do the maths and you are talking about at least 3,000 unionist votes “lent” to Ms Ritchie to keep Sinn Féin out.

That factor, plus Ritchie’s single-minded determination to maintain that vice-like grip on South Down, should ensure she is returned.