Same-sex couples may face marriage delay until next year

Upwards of 50,000 people walked, shimmied and disco-danced their way through Dublin today for Gay Pride. Organisers say the 2015 parade was twice as big in the wake of the same-sex marriage referendum. 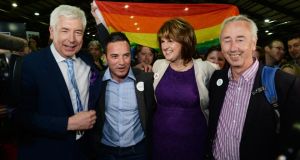 There is growing concern in Government that same-sex marriages could be delayed until next year.

The outcome of the referendum on May 22nd is the subject of a legal challenge, and senior Government sources are admitting the legislation could be delayed for months.

One senior official said: “Our hands are tied. We are at the mercy of the courts.

“We are ready to go when the referendum result is final but it looks like we are a long way from that point.

Two men sought leave to appeal the result of May 22nd in the High Court but it was dismissed.

Gerry Walshe is challenging that decision in the Court of Appeal, and his case is due for mention today.

However, it is unlikely to be heard for a number of weeks – with some suggesting months – and its decision could potentially be appealed by the Supreme Court.

The delay in introducing the legislation casts doubt over the Government’s plans in May that the first same-sex marriages could take place before Christmas.

The Labour TD said it was disappointing that on the weekend of celebrations of the referendum result, it was now entering a lengthy period of uncertainty.

He said nobody could interfere or influence the court but it was “hugely disappointing for so many people that a month after the referendum no legislation had been moved”.

“There is now a situation where neither piece of legislation could be passed until the autumn. It is currently in the Court of Appeal and it could possibly go to the Supreme Court, and we cannot pre-empt either decision.

“I was hoping to bring the transgender legislation through the House in July. We had provisional dates but at the moment we are frozen at our current state.”

This would have allowed the first same-sex marriage to take place by Christmas, as a three-month notification period is required for marriage.

The Dáil is due to rise on July 18th, and the appeals against the referendum’s outcome mean it may not consider the proposed legislation until mid-September.

One legal source said the Court of Appeal had a backlog of cases to work through and the delay could last for months.

“The Children’s Referendum was delayed by almost two years. We could potentially be looking at something similar.

“It is unlikely it will last this long but it cannot be ruled out.”

Former Minister for Justice Alan Shatter declined to comment on the case as it was before the courts.

However, he said there was growing concern about the number of legal proceedings being taken against the decisions of referendums.

He said legislative action is needed to ensure court challenges are fast-tracked and heard rapidly.

Mr Shatter said: “I believe such a delay undermines the democratic outcome of a referendum. It is important that the lives and aspirations of a substantial number of people are not placed indefinitely on hold for a lengthy period by such challenges.”