Confusion between ‘country’ and ‘nationality’ for Northern Ireland passengers 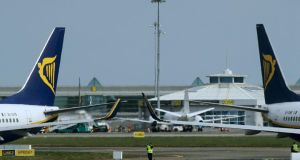 Ryanair has found itself caught in the eye of a diplomatic storm after confusion over its latest phone application update.

Users of the Ryanair app in Northern Ireland were left bemused following an update made earlier this week which some thought would deny them the opportunity to identify as UK citizens rather than Irish.

Martin Holtom, an English resident who regularly uses the discount carrier for flights to Dublin, said the change was very confusing. He contacted the airline’s customer services and received what he described as a “crass and insensitive” reply.

However, a spokeswoman for the company moved this evening to clarify the issue.

“As part of our app upgrade, we have replaced the ‘country’ drop down menu during the check-in process with a ‘nationality’ drop down, allowing customers to select the nationality on their passport,” she said in a statement. “We apologise for any confusion caused by the incorrect response sent by our customer service agent, and have contacted the customer to rectify this error.”

Mr Holtom, who describes himself as “very English”, said he was intent on making the point out of concern for affected Northern Irish residents.

“If you were a rampant unionist, given the complex history of the region, you would be entitled to go ballistic,” he said, before adding that the change was a sleight to “a large number of dead people” who died during the Troubles.

Earlier today, unionists voiced their dissatisfaction with the perceived sleight.

“Ryanair’s customer service team have got this completely wrong. It is the United Kingdom of Great Britain andNorthern Ireland, and irrespective of the differing national identities of Northern Ireland residents, we are all fully British citizens,” said an Ulster Unionist Party spokesman, who contacted Ryanair about the change.

“Despite a reputation for enjoying controversy from the publicity it generates, preventing people from Northern Ireland listing their nationality as British means that Ryanair is not only insulting many people here, but contradicting themselves,” said Mr McCrea.

“This appears to have arisen as a result of the latest update to the app so the simple solution would be for the company to revert back to the previous version for this particular aspect,” he added.

People born in Northern Ireland are entitled to apply for passports issued by the Republic of Ireland as well as the UK.