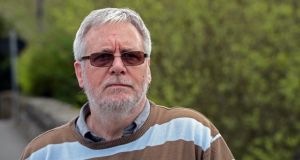 Tom Curran: “The decision came about as a result of conversations with Marie before she died. ‘What would you do if I wasn’t here?’ always came up.” Photograph: Eric Luke.

Right-to-die campaigner Tom Curran is to stand as an Independent candidate in this summer’s local elections.

The 65-year-old partner of the late Marie Fleming, who last April lost a landmark case to have the law on assisted suicide changed and who died in December, told The Irish Times in an interview last night it was his intention to stand for election in Co Wicklow.

“I just gave January to myself,” he said. “I wasn’t going to tax myself with anything during January and just let the difficult feelings come and go. That’s when I started to rethink where I was going from here.

“The decision came about as a result of conversations with Marie before she died. ‘What would you do if I wasn’t here?’ always came up. I suggested I might get back involved in community activism, as I’ve always been involved.

“Because of the amount of time involved with Marie, I dropped it and confined my efforts to her needs and her right to a peaceful death campaign. I had to stop being involved in everything else. That was something she said I should do because I was always interested in it.”

Mr Curran said he had enlisted the help of Wicklow Independent TD Stephen Donnelly who he said will act “more or less” as a campaign manager. “When I did have the time on my hands then, I spoke to Stephen Donnelly about the whole idea of going for local election and he said he’d put his weight behind it.

“I wouldn’t have been in a position to do it on my own. I wouldn’t have the knowledge how to put a campaign together. Stephen putting his support behind me was instrumental in my making the final decision because he has the campaign knowledge. He has the people to help me.”

Mr Curran said his long campaign for assisted suicide in this State was not the platform on which to run for local election, but that it was still an area in which he would continue to work.

“The right to die thing is more a national thing. I will continue with that but there are a lot of other things the people of south Wicklow need, like the regeneration of Arklow for example. It’s becoming a sort of ghost town.

“Healthcare is one specific area I am very close to. Things like respite and nursing home care. All that sort of thing in south Wicklow is slowly disappearing. Hospital palliative care is another area. There is no hospice in Wicklow.”