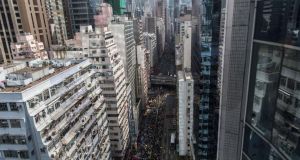 The plan was the brainchild of a lecturer at Reading University, Christy Davies, who warned that when Britain handed back Hong Kong to China in 1997, there would be no future for its 5.5 million inhabitants.

Even at the time it must have seemed like a truly bizarre idea. In the midst of the Northern Ireland Troubles, it was suggested that the entire population of Hong Kong should be uprooted and relocated in a new city built in the middle of the province.

While the scheme may appear too preposterous for words, newly-released files at the National Archives in Kew, west London, show that it nevertheless sparked a flurry of correspondence in Whitehall.

The plan was the brainchild of a lecturer at Reading University, Christy Davies, who warned that when Britain handed back Hong Kong to China in 1997, there would be no future for its 5.5 million inhabitants.

The alternative, he suggested, was to resettle them in a new “city state” to be established between Coleraine and Derry — a move, he said, which could revitalise the stagnant Northern Ireland economy.

When details of his scheme appeared in the Belfast News Letter in October 1983, they caught the eye of George Fergusson, an official in the Northern Ireland Office. He fired off a memorandum to a colleague in the Department of the Foreign Affairs here, declaring: “At this stage we see real advantages in taking the proposal seriously.”

Among the benefits, he suggested, was that it would help convince the unionist population that the government in Westminster was truly committed to retaining Northern Ireland in the UK.

“If the plantation were undertaken it would have evident advantages in reassuring Unionist opinion of the open-ended nature of the Union. There would be corresponding disadvantages in relation to the minority community (and Dublin),” he said.

It is not clear whether his tongue was in his cheek when he wrote, but by the time the reply came back two weeks later from the David Snoxell at the Foreign Office, somebody had twigged that the idea was perhaps not entirely serious. “My initial reaction, however, is that the proposal could be useful to the extent that the arrival of 5.5 million Chinese in Northern Ireland may induce the indigenous peoples to forsake their homeland for a future elsewhere,” Mr Snoxell drily replied. “We should not underestimate the danger of this taking the form of a mass exodus of boat refugees in the direction of South East Asia.

“On the other hand, the countries of that region may view with equanimity the prospect of receiving a God-fearing, law-abiding people with an ingrained work ethic, to replace those that have left.”

Worse, he added, the plan could have serious implications for the UK’s dispute with Dublin over the sovereignty of Lough Foyle. “The Chinese people of Hong

Kong are essentially a fishing and maritime people,” he wrote. “I am sure you would share our view that it would be unwise to settle the people of Hong

Kong in the vicinity of Lough Foyle until we had established our claims on the lough and whether these extended to the high or low water mark.”

A British Foreign Office colleague noted: “My mind will be boggling for the rest of the day.”