Reilly rules out decision on future after his exit 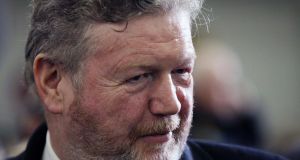 A number of Government Ministers lost their seats in a bruising general election for Fine Gael and Labour.

In an election that wiped a series of big names from political life the loss of Dr Reilly’s seat in Dublin Fingal has proven to be the most surprising result.

Dr Reilly puts his failure to be re-elected down to his period as Minister for Health at a time when the country had no money.

He said: “Probably my time in health would not have been exactly helpful to it, when the country had no money and a lot of hard decisions had to be made, some of which we did manage to reverse because they were very hard on people and, as somebody who would have worked as a doctor, they were fairly repugnant to me.

“But, if you are a member of cabinet, you have to take cabinet responsibility for decisions made around budget time that have, ultimately, the consequence they have.”

Asked if his time in politics was over he said: “Never say never and I always avoid always. Today is not the day for that decision.”

Alan Farrell succeeded in the constituency for the Fine Gael party at the expense of the Minister for Children.

Mr Shatter and Mr White both lost their seats in Dublin Rathdown.

Mr Shatter blamed the party and vote management in the constituency for his loss. “Unfortunately there was some interference in the electoral process by Fine Gael headquarters. I objected to it when it took place. To a minimal extent I attempted to counteract it, but I substantially didn’t.”

Mr Shatter was referring to letters, signed by Taoiseach Enda Kenny and MEP Brian Hayes, asking constituents in the Stillorgan and Clonskeagh areas to give number one votes to Josepha Madigan and number two to Mr Shatter.

“Unfortunately a letter went out to different parts of the constituency instructing people how to vote, it was based on an alleged poll I was advised was taken which I regarded as having no credibility of any description,” he said. Ms Madigan was elected.

Mr White said it had been “a very difficult day” for his party but insisted Labour could bounce back.

“Our vote has been down considerably obviously, that has an impact and an effect across all constituencies including this... I think the Labour party has made an immense contribution. We have come out of elections like this before and we have come back,” he said.

Mr White was not the only high-profile Labour casualty. Minister of State Kathleen Lynch , Minister for Small Business Ged Nash and consistent poll topper for Labour Willie Penrose all lost out. Emmet Stagg also lost out, as did Minister of State Ann Phelan and banking inquiry chairman Ciarán Lynch.

1 Coronavirus: More ‘striking’ evidence BCG vaccine might protect against Covid-19
2 Genetics shed light on origins of Irish strains of Covid-19
3 Boris Johnson in intensive care after coronavirus symptoms worsen
4 Coronavirus: 16 more people have died in Republic as public urged to ‘have patience’
5 Irish doctors on getting Covid-19: ‘In 90 minutes, I deteriorated quite rapidly’
Real news has value SUBSCRIBE