Reform Alliance could soar like an eagle....or turn into a turkey

Analysis: Group of party exiles may eventually become a party 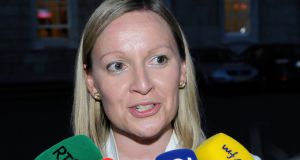 Lucinda Creighton gives an interview on the plinth outside the Dail in July after voting against one of the amendments to the Protection of Life During Pregnancy Bill. Photograph: Dave Meehan/The Irish Times

Is it a bird? Is it a plane? No, it’s the Reform Alliance.

And in the long run it could turn out to be an eagle. Equally it could very well be a turkey.

On Saturday week, the Reform Alliance is holding a day-long conference in the RDS in Dublin. The group of seven parliamentarians (five TDs and two senators) have gone to great lengths and care in describing themselves as a group and an alliance, never as a party.

One astute behind-the-scenes operator from another party believes the alliance is playing a very astute game... antagonising Fine Gael but never quite enough to be pushed into permanent exile, making themselves such a strong presence that they become indispensable.

It’s the narrative of the Prodigal Son - the most recent person who starred in that role was Roy Keane as he returned to the FAI.

But most commentators - including this one - believe there is only one logical outcome to this process. And that is that the Reform Alliance will eventually become a party.

That isn’t going to happen in the short-term. For instance, its registration with Sipo as a third party is largely aimed at allowing the group to raise funds for research and to accept donations.

There is also a question over how many of the seven would be prepared to be members of a new party, rather than as a new alliance.

That said, it is hard to see the group (especially with its strong personalities) content to remain some form of external Fine Gael ginger group, or a slightly more cohesive version (ideologically) of the Dáil technical group.

For its conference on the 25th it wants has borrowed the latest vogue jargon work ‘conversation’ to describe its aims.

It wants to “begin a bottom up national conversation on how to rebuild Ireland and introduce reforms that will have a positive long-term impact on individuals, families and Irish society”.

The alliance has selected three themes - political reform, the economy and health.

While careful not to nail any colours to any masts - they are inviting views and opinions - there is nothing in the comprehensive briefing document that could not have come out of a Fine Gael manifesto while the party was in opposition.

That’s hardly a surprise as all are Fine Gael members (if not members of its parliamentary party) and the ideological positioning was always going to be slightly right of centre.

So invariably, there is particular emphasis on the role of business (especially the SME sector) in the section on the economy and its health section hardly demurs from the big Fine Gael idea of universal health insurance.

The longer term future of the RA will depend on a number of factors. One turns on the personalities involved and we will return to that a little later. The second is the turn-out at the conference. The third factor depends a little on a big turnout but revolves around what the party will do with the ideas that come out of the conference: transform them into a manifesto or in a less formal or casual manner (a sign that a party isn’t in the offing)?

Inevitably, comparisons will be made with the RA and the Progressive Democrats. It was around this time of year in 1986 that Des O’Malley and Mary Harney held a series of meetings around the country with the hope of forming a nascent new political force.

The bumper turn-outs acted as a huge catalyst and the attendant publicity (as well as the likes of Pearse Wyse and Bobby Molloy jumping overboard from Fianna Fáil) certainly speeded the plough.

Despite every party loving the word ‘radical’, Irish politics (and the electorate) tends to be the exact opposite, conservative and resistant to change.

Every so often, however, a new idea or party emerges that attracts huge attention and creates momentum quickly. That much happened with the PDs. Certainly, the amount of hype and publicity surrounding the alliance could attract a lot of popular support, making it hard for its members to resist the idea of forming a party.

If strong, and genuinely radical, ideas emerge, it will be interesting to see what the group does with them, whether they will be formalised into a policy document.

If so, that is a big step towards a party, because those who represent the alliance will have to stand behind those policies. And it will be much easier - and more logical - to do so as a party rather than as a loose alliance of independents.

It is also interesting to note that the alliance has avoided any substantive mention of moral issues - its members do not want the alliance to be identified solely with the issue on which most of them parted company with the Fine Gael parliamentary party - the abortion legislation.

The PDs showed that there is certainly a space for a pro-enterprise right-of-centre niche party in Irish politics but despite being formed by Fianna Fáil dissidents it kind of became a consolation prize for disappointed Fine Gael voters.

With the alliance, it could be the same thing and if a distinct identity is not forged it will be a struggle for any party of that ilk to survive in the long term.

The personality factor is also important. The party’s dominant figure is Lucinda Creighton, who is smart, articulate, driven and a natural leader.

Too driven perhaps and she has divided opinion and loyalty before.

She must be aware that the political facts on the ground are that a return to the Fine Gael parliamentary party is not going to happen in the short, or medium, term and as long as Enda Kenny is leader.

It’s quite likely that he will be in that position until 2020 and a decade in the political wilderness or as an independent is just too long for a politician of Creighton’s calibre and ambition.

It’s quite likely that none of those big existential questions have been fully thrashed out by the group as yet. But as Chekhov noted very wisely a long time ago, if as a playwright you introduce a gun into a plot of a play you had better intend to use it.