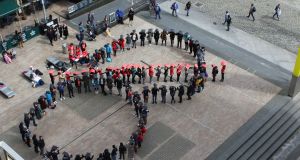 Campaigners form a figure 8 at a Dublin rally to appeal for a referendum on repealing the Eighth Amendment of the Constitution. Photograph: Yvette Kelly

Campaigners for a referendum on repealing the eighth Amendment of the Constitution, on abortion, are holding a day of action in Dublin city centre, that concludes with a rally at 4 pm outside the Ilac Centre.

Activities organised by the pro-choice group Rosa (for Reproductive Rights, against Oppression, Sexism and Austerity) included the creation of a human formation of an ‘8’ with an X through it, at Smithfield Square.

Stalls have been set up at three locations in the city centre, on Henry Street, at the Central Bank on Dame Street and on Grafton street, with a petition to call for a referendum to repeal the Amendment to the Constitution. Spokeswoman Rita Harrold said they were selling T-shirts and badges and “we have a little clothesline of knickers, where people can write messages like ‘my body my choice’, and ‘repeal the 8th’”.

A street theatre group has been giving five-minute long performances dramatising “examples of people who suffer because of the 8th Amendment”, said Ms Harrold. The drama aims to highlight Irish and global perspectives on abortion rights.

There were three drama performances along different parts of Grafton street, before the mobile drama group moved to the Central Bank and on to Henry Street.

Speakers at the “Rally for Repeal” will include chairwoman of the Coalition to Repeal the 8th Ailbhe Smyth, incoming president of the Union of Students in Ireland Annie Hoey, Anti-Austerity Alliance TD Ruth Coppinger, Inga Wojcik of Polish pro-choice group Dziewuchy Dziewuchom Irlandia and Aisling Grace of Rosa.

Speaking in advance of the rally Ms Grace highlighted the conviction in the North of a young woman for using the abortion pill as a demonstration of the “appalling implications of criminalising abortion for women”.

She said 12 women a day were forced to travel to England to access legal abortion services “while a similar number are daily faced with the threat of a 14-year prison sentence, brought in by Fine Gael and Labour under the so-called ‘Protection of Life During Pregnancy Act, for taking the abortion pill”.

Ms Coppinger said “poll after poll has shown the vast majority of people want a referendum to repeal the 8th, yet the issue is being used as a bargaining chip by anti-choice politicians in the current government formation talks”.

But the Pro Life Campaign (PLC) group said the events organised by Rosa “ignores the devastating effects of abortion for many women and are an attempt to rewrite what happened in the recent general election”.

PLC spokeswoman Cora Sherlock said “there will not be a single mention today by ROSA about the right to life of unborn children or the fact that many, many women suffer severe adverse mental health after-effects from abortion. The mantra about ‘repeal of the 8th Amendment’ side-steps this awful reality.”

She claimed “demand for dismantling the 8th Amendment isn’t strong at all. But those campaigning for abortion are trying to rewrite what happened in the election.”

Ms Sherlock added that “when the abortion issue was raised on doorsteps it was overwhelmingly pro-life people raising it, not people looking for repeal of the 8th Amendment”.

Rosa and other groups “insist on ignoring this fact just as they ignore the many thousands of people who are alive in Ireland today thanks to our Right to Life Amendment”.