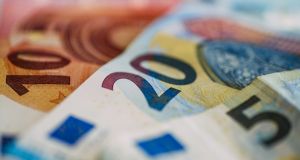 Unions are to seek pay increases of 4 per cent across the private sector from January.

The chairman of the private sector committee of the Irish Congress of Trade Unions John Douglas said this would be expected to lead to annual increases of about €1,000 per year for most workers.

He said such pay claims would be lodged across all unionised companies.

The private sector committee of Ictu made the recommendation to its affiliated unions on Tuesday morning based on its economic analysis.

Mr Douglas said unions believed pay claims if 4 per cent in 2017 in the private sector were “fully justified” given the stagnation in wages since 2010 and recent economic indications.

He said following the economic crash workers had lost jobs, pay and working hours and saw their conditions of employment deteriorate in areas such as pensions and sick pay schemes.

“The economy is beginning to grow again. The economic indicators would suggest that inflation will be running at in or around two per cent, worker productivity will be over one and a half per cent so we feel fully justified right across the economy in seeking pay increases in the region of four per cent.”

Mr Douglas said unions would enter into reasonable discussions with employers who said they had special circumstances and could not afford to pay increases of four per cent. However he said in cases where employers could afford to pay but refused to do so, union members would have to make decisions around that.

Meanwhile Taoiseach Enda Kenny said he “stood by Lansdowne Road”. Speaking in the Dail Mr Kenny stressed that “the Government will respond collectively in setting out an agenda, structure and strategy which we can best manage the circumstances we now find ourselves in as a country and not a situation where it becomes sector versus sector versus sector”.

Mr Kenny said the Minister for Public Expenditure and Reform “has acknowledged that arising from the Labour Court recommendation that this brings an added pressures to responsibilities that he must discharge”.

Earlier , the head of communications of the Impact trade union says that if the Government wants to sustain the Lansdowne Road Agreement then it needs to realise that it must be amended.

“If the Government prizes the agreement, and it says it does, then it will have to do more to protect it,” Bernard Harbor said.

He predicted that the Government will not respond on Tuesday to the ultimatum issued by Siptu boss Jack O’Connor on Monday.

Mr O’Connor has effectively set the Government a deadline of this Thursday to agree in principle to enter talks on a new pay deal – a process which he wants to commence by February – or his union will authorise strike ballots among its 60,000 public-service members.

The Government will discuss the escalating crisis over public sector pay at a meeting on Tuesday, with senior figures conceding that talks on a new pay settlement are likely in January or February of next year.

Ministers continue to insist that no extra money is available for public sector pay next year beyond the extra €660 million provided for in the recent budget.

Public servants are due to receive pay increases next year under the Lansdowne agreement but as pressures grow throughout the public sector, Government sources believe that some acceleration of the process may be inevitable.

“What’s more important is that the Government accepts that it has to do something to keep the Lansdowne Road Agreement and to bring forward negotiations,” Mr Harbor said.

He said trade unions were aware of the budgetary and economic realities of the country, but he said the alternative was that the agreement would unwind and the Government would be faced with a series of demands and industrial unrest.

Mr Harbor said that most of the parties who signed up to the Lansdowne agreement want it to be continued, but that it needs to be revised.

Attitudes had changed in the wake of the deal which saw the two Garda representative bodies, the GRA and the AGSI defer a planned strike following recommendations on pay issued by the Labour Court, he said. These recommendations are expected to be accepted by the Government.

“People will think that it might be better to be outside the agreement when they see what happened (with the garda deal),” Mr Harbor said.

“It’s not on to say they will be treated less well than gardaí. Once they see that others outside the agreement are being treated differently, then they won’t accept it,” he told RTÉ’s Today with Seán O’Rourke show.

Mr Harbor said that centralised agreement was the best way forward “as it means that the weaker, quieter voices don’t get left behind. In a free for all the loudest voices tend to get more.”

Meanwhile, Sinn Féin said the Lansdowne Road agreement is a “lame duck” and should be replaced with a new national pay agreement with the public sector trade unions which provides for pay rises for public servants, restoration of allowances for nurses, doctors teachers and gardai and the recruitment of thousands more public sector workers.

Speaking to the media at Leinster House, the party’s spokesman on public expenditure David Cullinane also said public sector workers recruited on lower salaries since 2013 should have their pay immediately increased to the level of their colleagues.

“We’ve gone from a situation where the Minister for Public Expenditure Paschal Donohoe has been telling us that the Lansdowne Road Agreement is the only show in town, well now we have no show in town,” Mr Cullinane said.

Mr Cullinane said public sector workers on low and middle incomes understood that restoration of their salaries would not happen overnight. However, he said restoration of salaries and allowances for those recruited in recent years - which the party estimates will cost €80milion a year - should be done immediately.

He said that the Public Sector Pay Commission was an attempt “to kick the can down the road and public sector workers can hear the sound of that very loudly and they don’t like it”.

Asked about the cost of public sector pay rises against a background of economic uncertainty, Mr Cullinane said that “the government found the money to cut capital gains tax in the Budget, they also found the money to give pay restoration to those on the top in the public sector . . . I believe the unions will be responsible. They will sit down and they will negotiate. What is the outcome? The outcome for us has to be an agreement that’s fair.”

Senior political figures are suggesting that while Cabinet will discuss public service pay on Tuesday there will be no decisions taken.

However, they accept that a process – variously described as “adjusting”, “updating” or “recasting” the Lansdowne agreement – will be necessary if widespread strikes in the public sector are to be avoided.

Most public service staff are due to receive a €1,000 increase in September 2017 under the Lansdowne accord.

It is understood that Ministers have been told it would cost about €25-€30 million for every month if this payment is brought forward.

If additional money is involved in any deal, then the full costs will be higher.

The Public Service Pay Commission, which was recently set up by the Government to examine pay levels in the public sector compared to both the private sector and the public services of other countries, and also to consider the value of public sector pensions, may now be asked to produce an early report in advance of pay talks next spring.

This would leave only a matter of weeks for the body to conduct complex comparisons and detailed calculations.