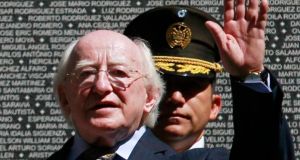 President Michael D Higgins: said the “struggle of the poor” was represented by the murder of Archbishop Romero and the killing of mourners at his funeral. Photograph: Ulises Rodriguez/Reuters

President Michael D Higgins described his visit yesterday to the grave of El Salvador’s Archbishop Oscar Romero as “very moving,” saying that his assassination in 1980 set off the great interest in Ireland in the small war-torn country.

Speaking outside San Salvador’s cathedral where Romero is buried, Mr Higgins said “the struggle of the poor” in El Salvador was represented by his murder and by the killing of 30 to 40 mourners at his funeral by government forces.

Romero was shot while saying Mass in a nearby church a day after he called on the army to stop killing civilians in a civil war between government forces and left-wing guerrillas that would eventually cost the lives of an estimated 80,000.

Mr Higgins said the archbishop’s death drew “such attention to the situation in El Salvador that the indiscriminate killings [were] suddenly in the gaze of the world”.

“From that moment that footage went around the world, people then realised we were at a time when a relatively small country experienced an enormous number of deaths,” he said.

The President is on a 12-day visit to Latin America, stopping in Mexico, El Salvador and Costa Rica.

Earlier, Mr Higgins visited El Salvador’s Monument to Memory and Truth, a memorial to those killed in the conflict with the names of 30,000 people murdered or “disappeared” etched on a long wall.

The President identified the name of his friend, the Salvadoran lawyer Marianella Garcia who first drew his attention to the killings in El Salvador in 1978. Garcia was raped and murdered by soldiers a year after a fact-finding mission to the country led by Mr Higgins to investigate a massacre at the rural village of El Mozote.

Mr Higgins was met at the wall by Flora Cuneguna Pena, president of an organisation named after Garcia that represents families of the victims of human rights abuses. She lost three sons and a daughter in the civil war.

‘To die three times’
Speaking at the memorial, Mr Higgins said “to be forgotten is to die twice” but that any attempt to stop remembering the people who died in the conflict was “to die three times”.

“The wall is a great act of love and remembrance,” he said. “It means that the sacrifice that people who died in terrible times, the people who worked for human rights will not be forgotten.”

After visiting the wall, Mr Higgins inspected an Irish-Salvadoran fair of local aid and community groups, most of which were supported by Irish charity Trócaire and Government funds donated by Irish Aid.

One of the community organisations was run by Samuel Ventura (39), who met Mr Higgins at the age of nine when the then Labour TD visited a refugee camp in Honduras in the early 1980s.