Representatives of some 70 countries will take part in commemorations 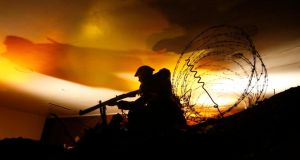 Part of an exhibition in Liège entitled “I was 20 in 14” shows a trench during the first World War. Photograph: Yves Herman.

President Michael D Higgins and his wife Sabina will take part in an international commemorative ceremony in Liège in Belgium today to mark the beginning of the first World War.

This evening the President and Mrs Higgins will attend a service hosted by the UK at Mons, where the first British army casualties of the war – including a number of Irish soldiers – are buried.

The ceremony at Liège this morning will be attended the by presidents of France and Germany, and members of the British and Belgian royal families.

President Higgins will join other heads of state and dignitaries at the event which is being hosted by the Belgian government in the city where the first sustained action of the war took place in August 1914.

More than 70 countries have been invited to participate at Liege, and 16 of them, including Ireland, will be represented by their heads of state.

The President and Mrs Higgins will be welcomed to the ceremonies by the king and queen of the Belgians.

There will be three elements to the Liège event, at the Abbaye Saint-Laurent, the Allied monument in the town and the Prince-Bishops’ Palace.

Liège was the first Belgian city to be attacked, and it put up a significant resistance to the invading German army. Thousands of people died in the siege, and hundreds of civilians were subsequently executed in atrocities committed by the Imperial German Army at Liège and other Belgian towns. Because of its heroic defence, it was awarded the Légion d’Honneur by France.

Today’s ceremony will begin at the Abbaye Saint-Laurent which is now used by the Belgian army. There, the king and queen of the Belgians will welcome the heads of state.

They will then all travel to the Cointe Inter-allied Memorial, which is the key focus of the event at Liège. The ceremony will include speeches from the governor of Liège province, the Belgian prime minister, the president of Germany, the Duke of Cambridge and the president of France.

Heads of state will depart first for the final event, the lunch at the Palace of the Prince-Evêque, located 10 minutes’ drive away.

Later that evening, the President and Mrs Higgins will attend the first World War commemorative service, hosted by the UK at St Symphorien military cemetery in Mons.

In the aftermath of the Battle of Mons, most of the British and German dead were buried in civilian cemeteries in the city and surrounding villages.

More than a year later, in November 1915, the German army began exhuming both German and British soldiers who had been killed at Mons and reinterring them in a plot of land at St Symphorien.

After an approach from a German officer, the owner of the site agreed that it could be used as a burial ground, but only on the condition that the British soldiers were buried and commemorated with the same dignity as their German counterparts. The landowner’s wishes were respected by the German authorities, who erected three monuments to the British dead in the cemetery, including a grey granite obelisk dedicated to the fallen of both sides that stands more than seven metres high.

The cemetery was inaugurated on September 6th, 1917. The opening ceremony was attended by a number of prominent German figures, including Crown Prince Rupprecht of Bavaria and Albrecht, Duke of Württemberg, both army commanders on the western front.

The cemetery remained in German hands until the end of the war when it passed into the care of the Imperial War Graves Commission. St Symphorien now contains the graves of 229 Commonwealth and 284 German servicemen of the First World War.

Among the other Irish soldiers buried there are Private James Collins from Waterford and, from a different class background, Capt Fergus George Arthur Forbes, son of the 7th Earl of Granard. Both men served with the Royal Irish Regiment.

The best known of the 28 Irish casualties buried at St Symphorien is Lt Maurice Dease from Coole, Co Westmeath, who was awarded the Victoria Cross for his actions at Mons on August 23rd.

The 25-year-old Dease was in command of a machine-gun section of the Royal Fusiliers who, although wounded, kept firing until all his men were shot. He was killed when hit for the fifth time.

St Symphorien is also the final resting place of Commonwealth and German soldiers who were killed in the last days and hours of the conflict, including George Ellison of the Royal Irish Lancers and George Price of the Canadian Infantry. Ellison and Price were killed not long before 11am on November 11th, 1918 and are believed to be the last Commonwealth combat casualties of the entire conflict.

The various memorials to the British dead that the Germans erected during the war lend the cemetery an air of peace and conciliation.

As the cemetery is the final resting place of officers and men from English, Irish and Scottish regiments, along with at least two Welshmen who were serving in English units, St Symphorien is a reminder of the sacrifices made by each of the four nations that make up these islands.