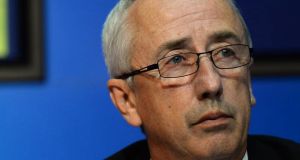 Minister of State at the Department of Social Protection Kevin Humphreys. Mr Humphreys said he was ‘quite concerned’ over an advertisment by the Irish Postmasters Union that included a request for personal public service (PPS) numbers. File photograph: Cyril Byrne/The Irish Times

The Irish Postmasters Union (IPU) has been warned by the Department of Social Protection that it may have broken social welfare legislation.

The union placed an advertisement in the Irish Independent newspaper earlier this month asking social protection recipients to consider switching from receiving their payments in their bank accounts to collecting them at post offices.

The advertisement contains a link to a form seeking the personal public service (PPS) numbers of interested parties, which is in breach of the law in this regard.

Minister of State at the Department of Social Protection Kevin Humphreys said he was “quite concerned” about the development.

Mr Humphreys said: “It is specified in legislation who can collect PPS numbers and the department’s attention has been brought to this.

“We have written to the IPU expressing our concern. This may have been an omission but the law is very clear.

“It is advisable for the IPU to contact the Data Protection Commissioner and agree how this sensitive information can be held and agree a protocol for the PPS numbers that have been collected to be destroyed.

“An Post is only legally covered for [the] specific purpose of paying Department of Social Protection customers.”

Tim Duggan, assistant secretary of the department, issued a letter to the IPU on May 11th requesting assurances that the matter be dealt with without delay.

It also asked for timelines on when the issue would be dealt with by the union.

Mr Duggan said the IPU, An Post or individual postmasters are not scheduled to seek PPS numbers - except where acting as agents of the department under its contract with An Post.

He said that any request made outside of that contract is in breach of the legislation.

At its annual conference earlier this month, the IPU had called on the public to switch from receiving social protection payments by electronic transfer to their bank accounts to collecting them at their post offices.

It followed this appeal with an advertisement in the national newspaper.

The IPU also provided a link to the form on its website, which has since been removed.

A spokesman for the IPU confirmed they had received correspondence raising concerns.

The spokesman said: “Given the concern raised, postmasters have not been accepting completed forms from customers and have been advising people to return completed forms directly to the department.

“The IPU has also responded to the department, requesting a meeting.”

The spokesman said the issue will be discussed with the department and that the organisation will comply with data protection requirements.

“The ad will not be run further until discussions have taken place and a wording is agreed.”

The spokesman could not give a figure on how many had returned the signed forms.

He did say that “many” customers had expressed an interest in making the switch to collecting payments via their post offices.